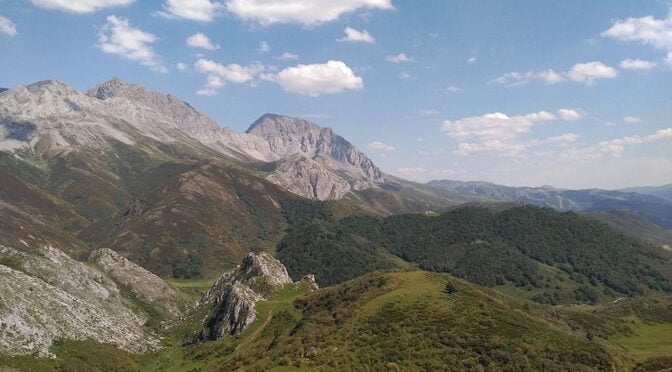 The Babia biosphere reserve is located in the in the Babia region, northwest of the province of León. The protected area covers around 38,000 hectares in the municipalities of Cabrillanes and San Emiliano.

At some point in the future this area may be combined with other protected areas and biospheres such as the Parque natural de Babia y Luna and the Omaña-Luna biosphere to form the recently proposed “Great Cantabrian Biosphere Reserve”.

To the north, the peaks of Peña Ubiña, Alto Rosapero and the Picos Blancos stand out due to their altitude of more than 2,000 meters whilst on the southern edge, La Cañada peak at 2,154 meters is just as impressive.

The land between these two mountainous areas has been shaped by humans and agriculture for many thousands of years and livestock farming using the various altitudes allowed year round food supply.

Population decline, a reduction in livestock farming and the opening of open cast coal mines in the area during the 20th century has also affected the landscape. There are still coal mines open in the area but it is logical to assume that they will close in the near future as renewable energy becomes the mainstream and fossil fuels are left behind.

Find a hotel close to the Babia Biosphere Reserve

From the high peaks of Babia de Peña Ubiña (2,417 m), Peña Orniz (2,193 m), Montihuero (2,180 m) or Alto de la Cañada (2,157 m), you can observe the mountainous landscape of the Biosphere Reserve of Babia and among the most important glacial features, you can see several lagoons such as Las Verdes in Torre de Babia, Laguna Grande in Lago de Babia or Lake Chao in Riolago de Babia. You can also see remains of glacial modeling and moraines in the valleys of La Cueta, Torre de Babia and Torrestío.

In 2013, the Babia Biosphere Reserve started a project to publicize and protect its night skies and without doubt, this is one of the best places in Spain for stargazers. Quite a recent developement, in Spain, a Star Park is a territory that protects its night sky enough to develop observation, educational, cultural or recreational activities, linked to astronomical events (passage of comets, eclipses of the moon and sun, alignment of planets, meteor showers, etc.

There is a sporadic but constant presence of the Cantabrian brown bear (Ursus arctos) in the area which acts as a corridor for individuals from the eastern and western nuclei of the Cantabrian populations. (Hence the plan for the “Great Cantabrian Biosphere Reserve”).

Although there is no evidence of its current presence in the area, the Cantabrian grouse or western capercaillie (Tetrao urogallus) deserves a special mention since there is recent historical data and the area is home to a habitat suitable for this species to flourish.

In the village of Riolago de Babia and located in the stunning palace of the Quiñones (who were once the powerful landowners in the area), this information centre has information panels and exhibitions detailing the human presence in the area and the areas long history of livestock farming. There is information about geology, fauna, flora and the best places to visit in the area.