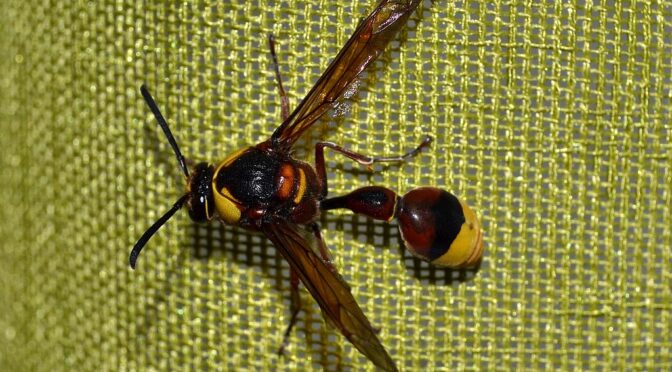 At up to an inch and a half in length, this beautiful wasp (Great Potter Wasp – Delta unguiculatum – Avispa Alfarera) is the largest European species of the Eumeninae subfamily.

The head is black with a yellow face and a yellow line behind the large eyes. The jaws are reddish brown.

The antennae are black, except for a small part of the scape that is yellow or reddish brown. The antennae of males are made up of thirteen segments, the last of which is curved, while those of females have only twelve segments and the last is straight. (The male is also somewhat smaller than the female).

They spend most of their time building nests gathering mud, and going back and forth from the nest to a source of water. Once the vessel-shaped nest is finished, it is stocked with caterpillar or larvae of other insects paralyzed with the venom of their stinger A single egg is deposited and as the prey does not die, it is in perfect condition for when the larva hatches in the autumn.

The images in this article were taken in the Sierra de Grazalema at around 600 metres during the month of August.