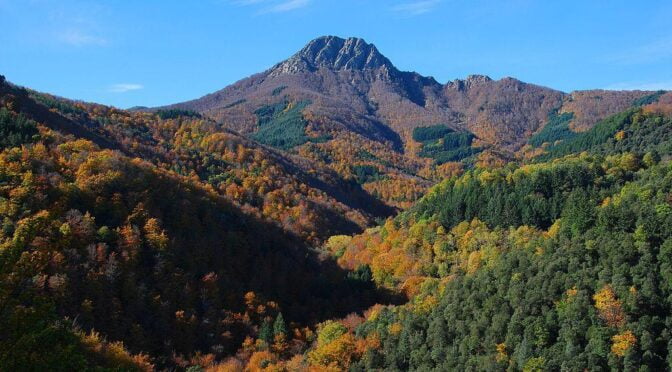 The Macizo del Montseny Natural Park (Just 50 kilometres from Barcelona) is the oldest in Catalonia and is also one of the most important because in a relatively small area there are typical plant communities of the three major European biomes : the Mediterranean (holm oak, cork oak and Aleppo pine), the Eurosiberian (Scots pine, beech and white fir) and boreoalpine (alpine meadow). The Montseny natural fir forest is the southernmost in Europe and this was the main reason that in 1978 UNESCO declared the area a protected Biosphere Reserve.

The Montseny massif is formed by the peaks of Turó de l’Home (1,706 metres), Les Agudes (1,703 metres), El Matagalls (1,697 metres) and the plain Pla de la Calma (Mount Drau, 1,344 metres). The major rivers in the area are the Congost, Tordera and Riera Major rivers. A combination that means that the vegetation is extremely lush and is home to an abundance of wildlife.

Among the cultural heritage there are the megalithic constructions in the Arca mountain range, the Roman villa of Can Terrers, many mediaeval churches, castles, fortified houses in the towns of Bellver and La Sala, the village of Tagamanent and the Sant Segimon hermitage.

Find a hotel in the Macizo del Montseny Natural Park

The Macizo del Montseny Natural Park is a botanists heaven as in a relatively small area one can find major habitats such as mediterranean forests, central European forests, meadows and moors, rivers and streams, rocks and cliffs, arable fields and croplands. Botanist visiting the area often describe it as travelling from “Southern to Northern Europe in just one day!”.

Even being close to a major Spanish city, the Macizo del Montseny Natural Park holds an extraordinary wildlife diversity with around 270 species of vertebrates recorded. The forested habitat pretty much determines the fauna that inhabits it such as deer, wild cat, wild boar, fox, genet, hare, common dormouse and water shrew.

There are several types of amphibians such as the vermillion frog and the Montseny newt (endemic to Catalonia). Amongst the reptiles are the European green lizard (Lacerta viridis) and the asp viper (Vipera aspis)

Catalogued as a Local Cultural Heritage Site, this group of monuments is possibly Catalonias birthplace. It boasts architectural elements and heritage from the 7th to 18th centuries. Funerary remains from the 5th century were recently discovered and it is one of the stop off points on the signed PR-C 200 footpath.

On the westernmost side of the Pla de la Calma plain, the park is home to the group of monuments of the Tagamanent hill (with the Romanesque church of Santa Maria at the summit), the L’Agustí House
Museum and the El Bellver farmhouse, a restaurant and park information point.

The Iberian Fortification of the Hill of El Montgròs

South-east of El Brull, we find the Iberian fortification of the hill of El Montgròs with a magnificent defensive rampart from 5th century B.C. This strategic settlement built by the Ausetani Iberians guaranteed control of the Plain of Vic. It was occupied from the Bronze Age until the Medieval period.

The Gualba stream flows from the waters of the Santa Fe reservoir until it meets the Tordera river. Follow the signed PR-C 211 footpath from the Gualba train station and this will take you to the reservoir and the spectacular beech forest.

The small hermitage of Sant Elies stands majestic at 1,000 m altitude at the summit of the hill of the same name. It has a crowned nave with a barrel vault, a bell gable and a small apse. Every 25 April, the feast of Saint Mark is honoured with a mass, an offering of bread and a communal meal.

Visiting allows you to envisage how life was in a great Medieval fortress. The building, abandoned around the 16th century was the residence/palace of Bernat de Cabrera, one of the most distinguished men of the Kingdom of Catalonia and Aragon in the 14th century.

The Santa Fe valley is one of the most charming areas in the El Montseny massif, as well as being one of the entrances to the Turó de l’Home hill and a land of marshes, magnificent beech forests and fir woods. Several footpaths lead off in various directions from here.

Collformic, in El Brull, situated at 1,145 m altitude, is characterised by its intense green grassy landscape and its spectacular panoramas. Many excursions leave from here, such as the trail up to the Tagamanen hill via the Pla de la Calma plain, or the GR 5-2 itinerary, which goes to El Matagalls, and the SL-C 85, which descends to El Brull.

Address: On the BV-5119 road at km 2,5 in Mosqueroles close to the town of Fogars de Montclús

This is the main information centre for the Macizo del Montseny Natural Park (Though there are quite a few other information centres in various towns and villages in the area). There is an excellent ethnographic museum with audio visual displays.

This is also the headquarters for the exhibition on the scientific work and patronage of Rafael Patxot: The Study on the Catalan Farmhouse, The Popular Songs of Catalonia and his relationship with hiking, meteorology and astronomy. (Read his biography here https://thebiography.us/en/patxot-i-jubert-rafael)

This is also the main headquarters and administrative centre of the natural park.