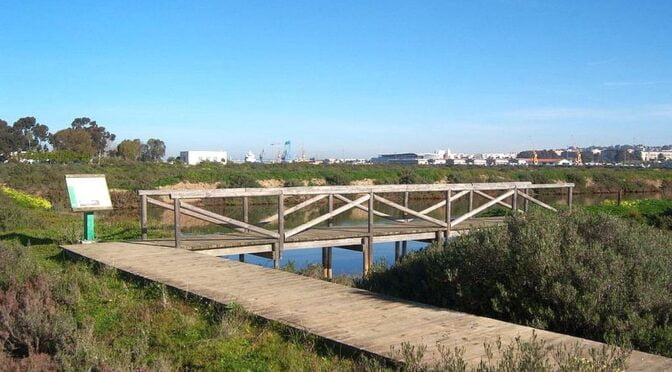 A relatively small protected area situated at the mouth of the river Odiel, between the towns of Huelva, Gibraleón, Aljaraque and Punta Umbría, the Marismas de Odiel Biosphere Reserve is an important wetland for both resident and migratory birdlife.

The two main nature reserves of the salt marshes of which both are notable for the degree of preservation of their ecosystems are El Burro with 597 hectares and the Isla de Enmedio with 480 hectares. The other areas to look out for are La Cascajera, El Almendral, Salinas de Bacuta, El Acebuchal, Calatilla de Bacuta and of course the beach of Playa del Espigón.

The botanic garden close to mazagón is well worth a visit. (See information below)

In the salt marshes, Spartina marítima and Salicornia ramosissima are present as are Arthrocnemum macrostachyum and Spartina densiflora.

The marshy vegetation is made up mostly of rushes (Juncus acutus and Juncus maritimus), bullrushes (Thypha dominguensis) and tamarisk (Tamarix canariensis).

The Odiel marshes are an important resting place for migratory birds and the area and also holds almost 30 % of the European population of spoonbills. Grey heron (Ardea cinerea), purple heron (Ardea purpurea) and marsh harrier (Circus aeroginosus) can also be seen in the area

During winter, many aquatic birds gather here, especially a large number of flamingos, that number in the thousands. Occasionally black stork (Ciconia nigra), crane (Grus grus) can be seen.

There is a good population of chameleon (in the sandy parts of the Saltes islands) and the rare Iberian lynx is present though rarely seen.

There is an exhibition on display both inside and around the building offering a detailed explanation of this extensive system of tidal marshes associated to the mouths of the Tinto and Odiel rivers. The exhibition shows the importance of these wetlands for the survival of a number of species of birds whose migratory routes include a stopover in this site.

In the Dunas del Odiel Botanical Garden you can learn about the species and plant communities characteristic of the Andalusian Atlantic coast. It is located between Huelva and Mazagón inside the Lagunas de Palos y las Madres Natural Area. (Address: Palos de la Frontera. Carretera N-442 Huelva-Mazagón, km 13.7)

The garden covers around 8 hectares of land dedicated to the conservation of the flora, fauna of the area and environmental education. There are various paths to walk and all the plants are labelled with Spanish common names and scientific names. there is also a small reception area with information about the 20 to 30-kilometer stretch between the mouth of the Guadiana in Huelva and the cliffs of Barbate in Cádiz.