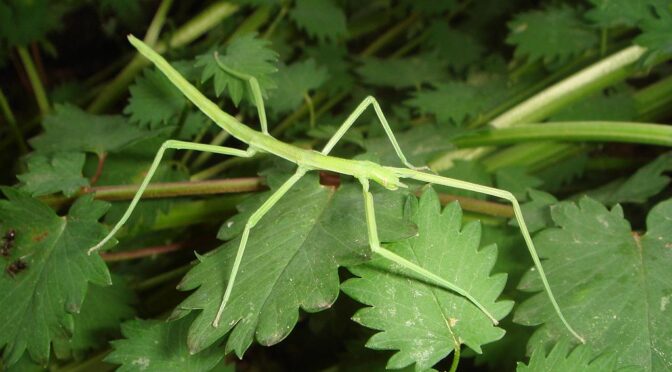 Mediterranean Stick Insect – Bacillus rossius – Insecto palo, there are 17 species of stick insects (Phasmatodea) in Europe belonging to the genera Bacillus, Clonopsis, Leptynia and Pijnackeria. There are also a few other species that live in Europe that have been introduced. (For example, some species of Acanthoxyla are native to New Zealand but are present in southern England).

On the Iberian Peninsula there are currently 13 recorded species and subspecies. All are very similar and difficult to identify apart from being stick insects that is 🙂

Adults have a slim body, with small antennae and long and thin legs. Colors vary from light green to brown and they have evolved to mimic twigs and leaves. They do this incredibly well, making it very hard to observe them, especially as they are active by night. Even the eggs are camouflaged, looking like plant seeds.

Females are normally larger than the males.

These insects are “annual”, living only during the hottest months of the year (especially genera Leptynia and Pijnackeria) and as s soon as the summer turns to autumn they tend to die off. (As far as I am aware there is no record of Mediterranean Stick Insects in Iberia overwintering).

The life cycle of the stick insect begins when the female deposits her eggs through one of these methods of oviposition: She will either flick her egg to the ground by a movement of the ovipositor or her entire abdomen, carefully place the eggs in the axils of the host plant, bury them in small pits in the soil, or stick the eggs to a substrate, usually a stem or leaf of the food plant. A single female lays from 100 to 1,200 eggs after mating, depending on the species.

Many species of phasmids are parthenogenic, meaning the females lay eggs without needing to mate with males to produce offspring. Eggs from virgin mothers are entirely female and hatch into nymphs that are exact copies of their mothers.

Wikipedia has a pretty in depth article about Phasmatodea here: https://en.wikipedia.org/wiki/Phasmatodea