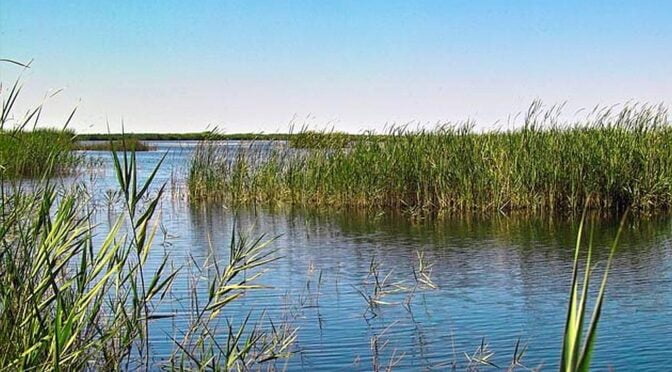 The Prado de Cabanes -Torreblanca Natural Park (in Valencian, Parc Natural del Prat de Cabanes-Torreblanca) consists of an area of ​​wetlands separated from the sea by a natural dam of gravels and sandy marshes. the area is popular with birdwatchers for the various species of waterfowl present.

Considering the population nucleos very close to this protected area, the fauna numbers of Prado de Cabanes -Torreblanca Natural Park is very high with the presence of endemic species such as the decapod crustacean Palaemonetes zariquieyi, a typical species of coastal wetlands with un polluted waters.

Among fish, the Spanish toothcarp, fartet (Aphanius iberus) also known as the Spanish pupfish or Iberian killifish, is a small species of fish endemic to the south of Catalonia and the Valencian Community in the family Cyprinodontidae. Its risk of extinction is one of the greatest of any Iberian vertebrate.

The presence of the European pond terrapin (Emys orbicularis) stands out. A species in serious decline in the Valencian Community (and Spain in general) due to the degradation of water quality and the appearance of exotic invasive species such as the red-eared slider. For this reason the Prado de Cabanes -Torreblanca Natural Park participates in the LIFE TRACHEMYS Project. whos sole objective is to reclaim the historical territories of the European pond terrapin.

Bird fauna is well represented with the most important nesting colony of collared pratincole (Glareola pratincola) on the Spanish Mediterranean coast with international importance according to the Ramsar Convention on Wetlands. Moustached warbler (Acrocephalus melanopogon) has one of its best populations in the peninsula and nesting pairs of Montagu’s harrier (Circus pygargus) and marsh harrier (Circus aeruginosus) are also present in good numbers.

Close to this area you can also explore the natural parks of the Sierra de Irta and the Desierto de las Palmas.

The general tourist information centres in Cabanes and Torreblanca have good information and recomendations for getting the most out of a visit to this area.

The interpretation centre for the park is located next to the Instituto de Acuicultura de Torre de la Sal in Ribera de Cabanes. There is also an information centre located in Torrenostra called Espai Natura (Avenida de Castellón 34)