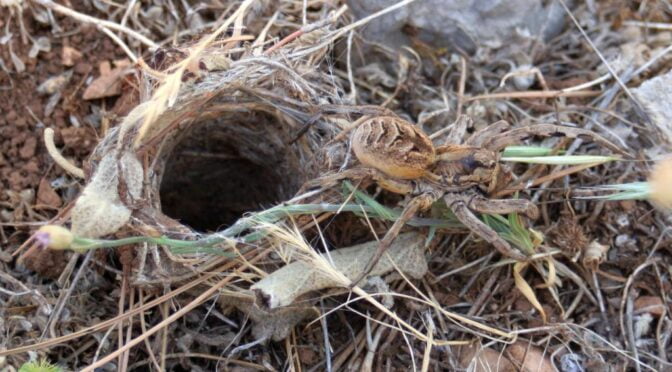 Originally known as a tarantula (Theraphosidae family), the Spanish wolf spider – Lycosa hispanica – Araña lobo is in fact a member of the wolf spider family, the Lycosidae. It is the largest spider to be found in Spain.

The shape of the body is large, robust,rounded and brownish in color. It has very long and thin legs that are somewhat lighter in color that may have white spots. Look closely and you will see six eyes (two big ones with four smaller underneath), and very large chelicerae (mouthparts). Its entire body is covered with hairs. Females can be up to 30mm in size whilst males are smaller at 19mm. Lifespan is around two years for males (who normally die after sexual maturity and mating) and four years for females.

Mostly nocturnal, this spider feeds on small invertebrates and sometimes other spiders. Rarely found indoors as they prefer wooded or landscaped areas with vegetation, their burrows are often hidden beside a stone or log. The burrows are unmistakeble with a constructed surrounding of twigs and grass. Males have burrows but tend to roam more whilst females live almost exclusively in their burrows especially whilst taking care of upwards of 100 eggs. Once hatched she leaves the nest carrying the spiderlings on her back on her back which whilst protecting the spiderlings during their first few days is also her way of dispersing her offspring.

The biggest predator of the Spanish wolf spider – Lycosa hispanica – Araña lobo here in Spain is the yellow scorpion (Buthus occitanus) which actively seeks out the spiders burrow. Birds such as the hoopoe, blackbirds and woodpeckers also feed on these spiders.

Venomous (To humans no)

These spiders are not aggresive and prefer to stay out of the way of large mammals. The venom they carry is important as a means of killing prey, and secondarily, self-protection. It is designed to affect insect-like prey and is not particularly toxic to humans though some people, if bitten, have compared it to a bee sting.

Lycosa fasciiventris seems to have the same distribution in Spain but roams rather than makes a burrow (so if you find one in a burrow its probably Lycosa hispanica and a female)and also if you look closely the gap between the lower (middle) set of eyes is very narrow.

It is also easily confused with the wolf spider Hogna radiata but, in theory, it is differentiated because Hogna radiata has a radiated design on the prosoma/cephalothorax. (The juicy bit at the back behind the main body.) Hogna radiata is also a roaming spider not found in burrows. Same goes for Hogna ferox which is also smaller in size.

So, basically, if it is in a burrow as in the images above it is Lycosa hispanica

The dance of the spider

The wolf spider – Lycosa tarantula – Araña lobo was once very common in the Apulia region of Italy and near the city of Taranto, from which it gets its name. Historical superstition has it that the spider’s bite could produce severe symptoms called “tarantism” is the basis of the dance known as the Tarantella.

Also known as “the dance of the spider,” the Tarantella is derived from the Italian word tarantola, meaning tarantula. The tarantola gets its name from the town of Taranto in Puglia, where the bite of the local wolf spider (thought once to be a tarantula) was widely believed to be highly poisonous and if bitten a person would succumb to an illness known as tarantism.

The tarantism epidemic was common through Taranto and other parts of Italy between the 15th and 17th centuries. According to legend, once bitten by a tarantula, the victim (almost always a woman) referred to as the tarantata would fall into a fit and “plagued by heightened excitability and restlessness“. Eventually, if not treated, she would succumb to the condition and die.

The only cure, it seemed, was to engage in the frenzied dancing ritual of the Tarantella. Townspeople would surround the tarantata whilst musicians would play instruments such as mandolins, guitars, and tambourines in different tempos in search of the correct healing rhythm. Each varied beat would affect the tarantata, leading her to move in erratic ways in line with the tempo. Once the correct rhythm was found, the victim continued dancing the Tarantella until exhausted and cured, having “sweated out” the venom! Read more here: https://www.eataly.com/us_en/magazine/culture/dancing-the-tarantella/