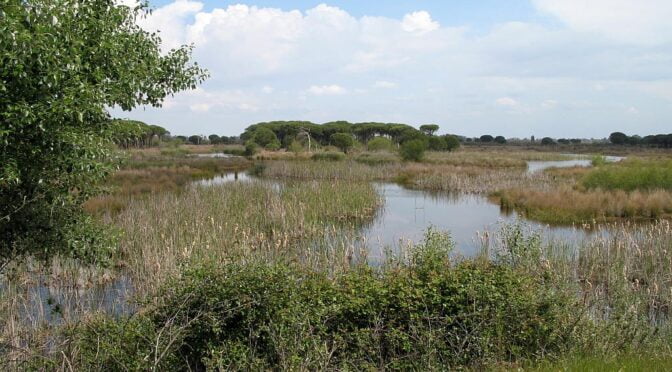 Many years ago it was obvious to anyone with an “ecological eye” visiting the area of Doñana that the plastic tunnels filled with flowers and strawberry plants popping up all over the place would obviously need a huge amount of water. Also, the development of Matalascañas as a tourist resort would also require a lot of water for all the hotels and guest apartments etc.

During 2009, the European Commission received several complaints and petitions denouncing the deterioration of habitats in the protected natural area of ​​Doñana caused by cultivation areas for strawberries that require large quantities of water for irrigation. This abstraction from wells and bore holes exceeded, in many areas, the renewal of groundwater, which has led, for many years, to a drop in the areas aquifer level.

More than 10 years later, the complaints have now been heard in the European Court and Spain has been found negligent in its protection of the water supply of the Doñana National Park.

Below are a few quotes translated to English from the courts decision. If you visit the official website you can use the case number or press release number to view the original press release in Spanish or French.

Commission / Spain (Deterioration of the natural area of ​​Doñana)

The Doñana Natural Area located in Andalusia, in the southwest of Spain, includes the Doñana National Park and the Doñana Natural Park. In 2006, three protected areas of Community importance under the Habitats Directive are also designated in the area. Doñana (already a bird conservation area since 1987 ), Doñana Norte y Oeste and Dehesa del Estero y Montes by Moguer.

The Commission considered that this situation constituted a breach of Union law, namely the prohibition of deterioration provided for by the Water Framework Directive as well as, with regard to various habitats in protected areas which dry up due to the drop in groundwater levels, the deterioration ban provided for by the “habitats” directive. She therefore brought an action for failure to fulfill obligations against Spain.

In today’s judgment, (24th June 2021) the court notes that Spain has failed to fulfill its obligations under the Water Framework Directive.

The Court finds that the Commission has sufficiently demonstrated the likelihood that the excessive abstraction of water for the urban supply of the tourist area of ​​Matalascañas has caused significant disturbances in the protected habitats of the Doñana protected area.

This disturbance of protected habitats should therefore have been taken into account in the program of measures drawn up by Spain as part of the Guadalquivir hydrological plan 2015-2021, in order to put an end to the deterioration already observed in habitat types such as the Mediterranean temporary pools. Also, the program of measures invoked by Spain does not contain measures aimed at stopping the deterioration already observed in the varied habitats in the protected area near Matalascañas.

The Court notes that several scientific studies show that the overexploitation of the Doñana aquifer has led to a drop in the level of groundwater causing constant disturbance of the protected areas of the Doñana Protected Natural Area. This data shows, in particular, the impact on water catchments caused by the urban supply of the tourist area of ​​Matalascañas and on the ecosystems of the Doñana protected area, especially on the priority habitat types constituted by the Mediterranean temporary ponds.

Its so sad. This is a NATIONAL PARK, a BIOSPHERE RESERVE and has had hundreds of millions in financing over the many years that it has been declared a protected area. Some of the finest biologists and scientists have dedicated their lifes work to this environment and the wildlife that resides here. It is nothing more than a disgrace that the Spanish government has allowed, and continues to allow this to happen. So that we can eat strawberries in January?? Really?