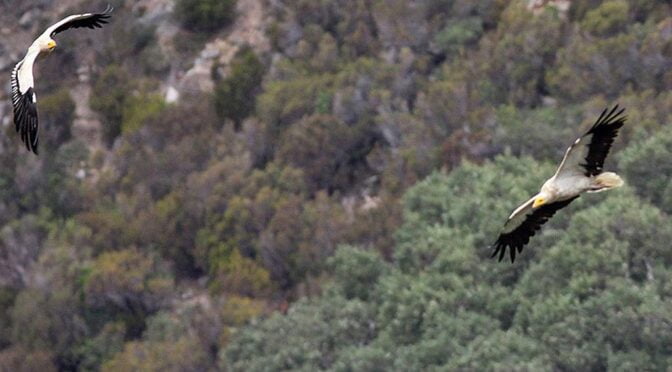 Adult Egyptian Vulture – Neophron percnopterus – Alimoche Común have a white body, white wings with black flight feathers and a white tail. The head and legs are yellow. In flight the distinctive white and black, with characteristic wedge-shaped tail are key points to note. The young are brown.

Egyptian vultures normally fly solo or with their partner, but can sometimes be observed thermalling with other vulture species (Gyps fulvus). They begin to arrive in Spain in late February and during March set about finding a site for a nest, sometimes using the same as the previous year.

This vulture is usually one of the last animals to arrive at the carrion from which it feeds. When other larger species have already eaten most of the meat, the Egyptian vulture cleans the scraps from between the bones. Supplementing their diet with insects and small animals as well as all kinds of waste, even animal faeces.

They nests in cliffs and caves in the mountains. The clutch consists of one or two eggs, incubation takes about 42 days and is carried out by both parents. The juveniles will fly to (and remain in Africa) for several years, usually until reaching reproductive maturity, when they will normally return to their countries of origin.

Migratory adults spend the winter in sub-Saharan Africa returning via the Strait of Gibraltar in early March and leaving by the same route in late September.

This species is in decline for several reasons:

There are three widely recognised subspecies of the Egyptian vulture. The nominate subspecies, Neophron percnopterus percnopterus, has the largest range, occurring in southern Europe, northern Africa, the Middle East, Central Asia, and the north-west of India. Populations breeding in the temperate zone migrate south during winter. It has a dark grey bill.

The Indian subcontinent is the range of subspecies Neophron percnopterus ginginianus, the smallest of the three subspecies, which is identifiable by a pale yellow bill.

More information about the globally endangered Egyptian vulture (and other vulture species) can be found on the fantastic website of the Vulture Conservancy Foundation
https://4vultures.org/vultures/egyptian-vulture/

Wikipedia has an excellent and updated page about the Egyptian vulture
https://en.wikipedia.org/wiki/Egyptian_vulture