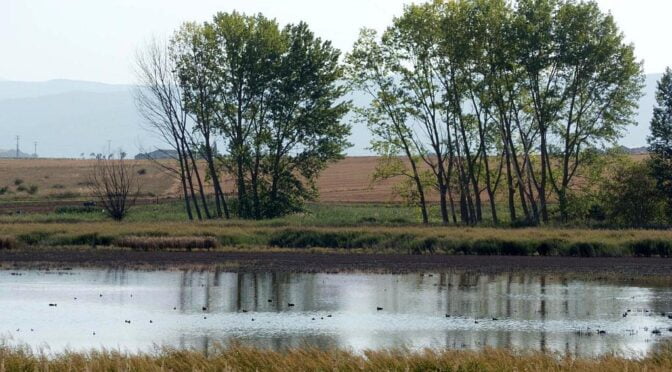 Wetlands are one of the richest and most productive ecosystems on the planet. They are areas of high natural wealth that act as a prominent refuge for biodiversity and play an important role in modulating weather conditions and the hydrological cycle, without forgetting other values ​​such as landscape and socio-cultural values. There are around 50 Lagoons and wetlands in La Rioja and here is the list to help you get started with visiting some of them. The two main wetland lagoons not to miss are the laguna de Hervías and the lagunas de Urbión

Find a hotel and visit the lagunas in La Rioja

The Laguna de Hervías is a small natural endorheic lagoon (Mediterranean temporary pond) that occupies about 15 hectares of surface and is located in the municipality of Hervías near Santo Domingo de la Calzada. The lagoon is located at the western end of the Ebro Depression, in the Rioja Alta Region.

The current vegetation of the lagoon is characterized by its arrangement in bands associated with and depending on the degree of flooding and salinity, so that the innermost zone is basically made up of glasswort (Salicornia europaea), the zone that is flooded by Sedge (Cyperus rotundus), and the outer zone by reeds.

The different hydrophytic species or aquatic plants found in the Laguna de Hervías are algae (Chara vulgaris and C. Hispida), duckweed (Lemna sp). These non-rooted vegetation live suspended or floating on the surface of still and fresh waters with other floating herbaceous plants such as lagoon grass (Ranunculus peltatus) which has small white flowers that develop in the shallow water.

The reed beds are made up of (Typho-Scirpetum tabernaemontani) that support high salinity, cane (Phragmites australis) and these are accompanied by bindweed (Calystegia sepium) and marshmallow (Althaea officinalis) which occupy the drainage channel that surrounds the lagoon. In addition to these species small poplar groves (Populus nigra) and Mediterranean scrub type vegetation are present.

Humid areas such as these are, in general, home to a specific associated fauna (especially aquatic birds, amphibians, insects, etc.) and are essential for the survival of the surrounding fauna, especially in arid or semi-arid areas and in highly humanized environments, as is the case of the Hervías Lagoon.

The waterfowl found in the Laguna de Hervías are of interest especially during the months of March/April (prenuptial step) when the largest number of migratory birds is recorded. However, according to the waterfowl censuses carried out in recent years, only one nesting species can be observed in this lagoon, the moorhen (Gallinulla chloropus)

The Urbión wetlands complex near to the tiny village of Viniegra de Abajo is a high mountain ecosystem that has remained isolated for thousands of years in the middle of the Mediterranean region. At the foot of the Urbión mountains and on the Rioja slope, glacial effects have created this set of ten lagoons. One lagoon is permanent and typically alpine whilst the rest are smaller and do not always contain water depending on season and rainfall. In February 2006 the urbión lagoons became part of the List of Wetlands of International Importance (Ramsar)

The best place to head for to find out about the many lagunas in La Rioja is the main information centre for the natural Park of the Sierra de Cebollera.

It Located in the village of Villoslada de Cameros, at the crossroads between the roads to Montenegro and the Hermitage of Lomos de Orios.

There is an excellent exhibition entitled “Sierra de Cebollera: Atlantic refuge in a Mediterranean world” which looks at the most unique environmental values ​​of the park, its fauna, flora, wetlands, lagunas and human impact on the area.