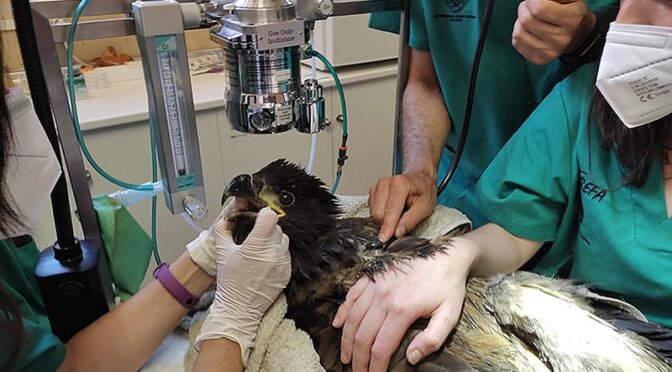 The GREFA project continues its work with the reintroduction of the extinct (in Spain) white-tailed eagle (Haliaeetus albicilla). Over the last few years many conservation programs in Europe have successfully brought back this historically persecuted eagle to stable population numbers and the equally successful breeding and reintroduction program in Norway has now sent nine young birds to be cared for in a hacking enclosure in Pimiango, Ribadedeva (Asturias).

As ever there are critics and supporters of this project. Mainly, the critics are stating the the white tailed eagle was never a breeding, resident species in the Iberian Peninsular…..Join in on the conversation about this at the Iberia nature Forum: https://iberianatureforum.com/forums/topic/reintroduction-of-the-extinct-spain-white-tailed-eagle-haliaeetus-albicill

The young birds have been fitted with radio transmitters and will hopefully be released in the Autumn (2021).

The first two years of the project have been conceived as an experimental phase in which new reintroduction techniques based on GREFA’s long experience in the recovery of large birds of prey will be tested. After this phase, an assessment will be made of the results obtained in relation to the adaptation and integration of the birds released into the ecosystem.

If the experimental phase reaches a positive evaluation, the Pigargo Project will continue with the annual release of up to twenty specimens for at least five more years, in order to establish a future breeding population of the species in Spain.

For further reading on the white-tailed eagle (Haliaeetus albicilla) there is an incredibly informative and in depth article at wikipedia: https://en.wikipedia.org/wiki/White-tailed_eagle

And, the original press release article at GREFA (In Spanish) here: https://www.grefa.org/noticias/94-notas-de-prensa/3833-nota-de-prensa-se-inicia-la-reintroducci%C3%B3n-del-pigargo-europeo-en-espa%C3%B1a-con-la-llegada-hoy-a-asturias-de-nueve-ejemplares-j%C3%B3venes.html

GREFA have worked closely with the reintroduction of the bearded vulture in Spain.: https://wildsideholidays.co.uk/bearded-vulture-gypaetus-barbatus-quebrantahuesos/

The best and most up do date information about Wildlife in Spain and where to see it! https://wildsideholidays.co.uk/