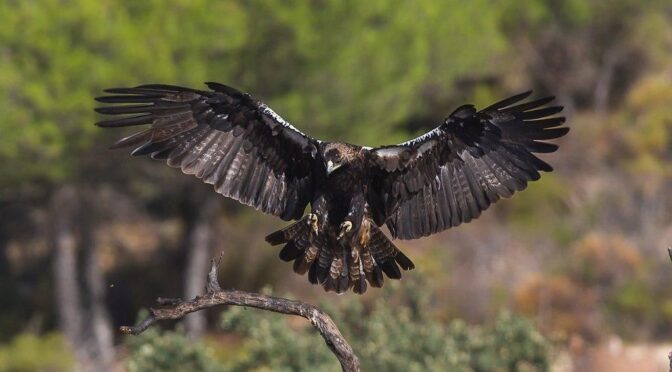 Last years 2020 breeding season for the Iberian Imperial eagle (Aquila adalberti) has seen some excellent results with. There are new nesting pairs of Spanish Imperial Eagle in Andalusia and 138 hatchings were recorded in Andalusia with 122 leaving the nest successfully and only 13 cases of mortality. Most of the breeding pairs of the Iberian imperial eagle in Andalusia are located in the province of Jaén, where there are 50, while the province of Cordoba is in second place, with 32 pairs, and then Seville, with 27. The rest It is distributed between those of Huelva (6), Cádiz (5) and Granada (3).

This increase in new distribution areas in the provinces of Granada, Cádiz and in the Sierras Béticas of Jaén consolidates the viability of the Andalusian population, while the number of couples in Sierra Morena has grown, which has made it possible to unite the eastern and western sub-nuclei, increasing the population of the province of Seville by five pairs, where a population decline had been detected in recent years.

The breeding success of 2020 was certainly helped by the confinement due to the Covid-19 health crisis and the closure of sites where nesting took place which has reduced human disturbance to the reproductive pairs. Nesting habitat is usually dry, mature woodlands, which they utilize for nesting and seclusion, but nests are most often fairly close to shrubby openings and wetland areas where prey is more likely to be concentrated. A shy species, they normally nest only where human disturbance is quite low.

Read more about the Spanish Imperial Eagle on wikipedia https://en.wikipedia.org/wiki/Spanish_imperial_eagle