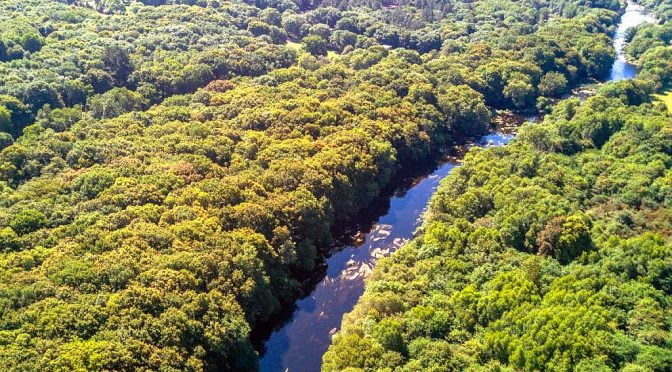 The massive Terras de Miño biosphere reserve is the second largest biosphere reserve in Spain (After the Valle del Cabriel in Castilla la Mancha with its 421.765 hectares). It not only includes the capital of the region (Lugo) but also the special protection zones (Zona de Especial Protección de los Valores Naturales (ZEPVN) of Parga-Ladra-Támoga, Sierra del Xistral, Miño-Neira, Ría de Foz-Masma and the Sierra del Careón.

The Cospeito lagoon, also known as the Santa Cristina lagoon is fed by the river Guisande, a tributary of the Miño, and is a permanent wetland located in the parish of Santa Cristina, in front of the town of Sistallo. It belongs to the Natura 2000 Network and has been declared by the Ministry of the Environment of the Junta de Galicia as a Protected Natural Area.

The original lagoon occupied about 70 ha but it was drained in the late 1960s and then partially restored in the early 2000s. Currently, the central lagoon covers around 5 hectares which makes it the most important wetland in the region.

Located on the lagoon, there is an interpretation centre, a circular footpath and various bird watching hides and viewpoints.

Viewpoints and places not to miss

Castelo de Goía in the Carba mountain range at 871 m altitude this recreation area is an excellent observation point for panoramic views of the regions of Terra Chá, Eume and the Western Mariña. there is also a picnic area.

Close to O palomar with a great view of the river Miño with its “Caneiros” (dams where fishing nets are placed), islands, the long river walk, the neighbourhood of San Lazaro and the neighborhood of A Ponte, with its Roman bridge.

The viewpoint of Feira do Monte is situated on the highest point of Cospeito just a few metres from the shrine of Our Lady of the Mountain. From this point, an overview of much of the region is obtained with the Lake of Cospeito in the foreground.

The Penas de Rodas recreation area in Santiago de Gaioso gets its name being between (the stones of Rodas) which are two granite masses. From its elevated position surrounded by a pine woodland there are excellent views of the plains below and surrounding areas.

Close to Garañon this viewpoint located in the area traditionally known as the Costa da Viña (Vineyard Coast) has a beautiful view of the surroundings of Lugo, in particular: the Roman bridge, the health resort, the Roman baths and the river walk on the Miño.

Fantastic views from the village of Lancara of meadows and streams.

Great views from this picnic area which is also a refuge for fishermen.

It is worth highlighting the importance of thermal tourism in Terras do Miño. The Lugo Spa (where you can also visit the Roman Baths), and the Guitiriz Spa are very popular and In addition, there are a large number of thermal waters that are said to have therapeutic properties such as Charca de Alligal and Riocaldo.

The Reserve also has a large number of hiking trails that allow visitors to discover the natural and ethnographic heritage of the area. For example, the Camiño do Miño, with more than 100 km of river route, the Rutas das Insuas, which runs through protected natural areas, or the Guitiriz water route. Most of the information centres in the area have maps and guides on walking routes in the Terras de Miño biosphere reserve

At almost an hour and a half long this video shows almost all the aspects of the area both natural and cultural. It is in Spanish but well worth watching if you are visiting the area

Almost all of the towns and villages within the Terras de Miño biosphere reserve have some kind of general tourist office with three that stand out as obligatory visits if you are in the area.

Located in Paseo del Rato in the town of Lugo

The main interpretation and information centre for the Terras de Miño biosphere reserve is located in a renovated building that was formerly “o muíño do tendeiro” (the mill of the shopkeeper). There is an audio-visual presentation of the ethnography, nature, history, landscape and culture. There are also themed exhibition rooms based on subjects such as forest, river and photography.

Located on Rosalía de Castro close to the town of Cospeito

The interpretation centre of the Cospeito lagoon has a reception and information for visitors, guided tours for school students, census and periodic monitoring of the lake birds, organization of courses on ornithology, lectures, conferences and exhibitions.

Located on the River Chamoso, at the site of Santa Comba, near the city of Lugo, this was once an an important industrial complex in which the power of the water by an ingenious channel architecture powered various types of industrial machinery. Until the 60s, it was employed for the manufacture of sickles, to grind grain and furniture making. There is also a fantastic restaurant here with great views along the river Chamoso