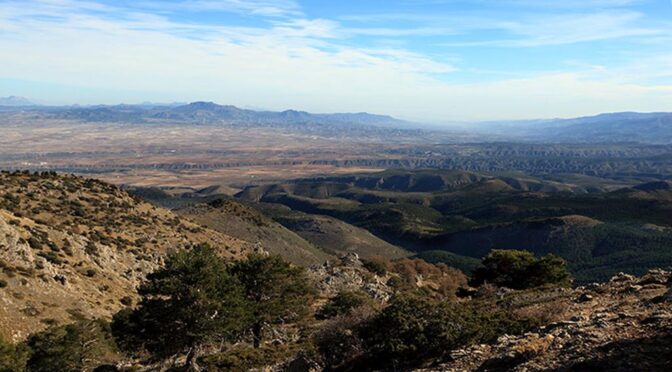 The sierra de Baza with its limestone peaks over 2000m is a relatively humid, botanical jewel between two arid plains of Las Hoyas de Guadix-Baza and the Llanos del Marquesado. It is part of the Cordillera Penibética range with the highest peak of Santa Bárbara at 2,271m. The steep slopes have a covering of pines with oaks and acer.

Sempervivum nevadense, once thought only to exist in the neighbouring Sierra Nevada, grows on the rocky ground at the highest peak. This exposed area also holds tight cushions of spiny shrubs that are protected from grazing animals and against weather extremes.

Find a hotel in the Sierra de Baza

The wide variety of birdlife includes Golden, Short-toed, Booted and Bonelli’s eagles, Peregrine, Kestrel, Buzzard, Egyptian vulture and Eagle owl. On the ground look out for Crested lark, Red-legged partridge and Hoopoe, with Turtle doves and woodpeckers in the wooded areas.

Villages in the area

Centro de Visitantes Narváez accessible by taking the Baza exit on the A92 at Km 325.

This visitor centre is housed in an elegant, classical style early 20th century building at the heart of the Sierra de Baza Natural Park.

In it, visitors can learn about the biodiversity of the surrounding Sierra, and how its varied flora is influenced by factors such as differences in altitude, climate or relief.

One section of the exhibition is dedicated to local archaeological sites and evidence of Man’s early presence in the area. There is also a display of craft products donated by the local people to demonstrate traditional activities in the Park.

A virtual tour of this information centre can be found here
https://visitas-virtuales.s3.eu-west-1.amazonaws.com/junta-de-andalucia/virtual-tour-english/granada/index.htm

There is an excellent magazine website in Spanish language about the area
http://www.sierradebaza.org/