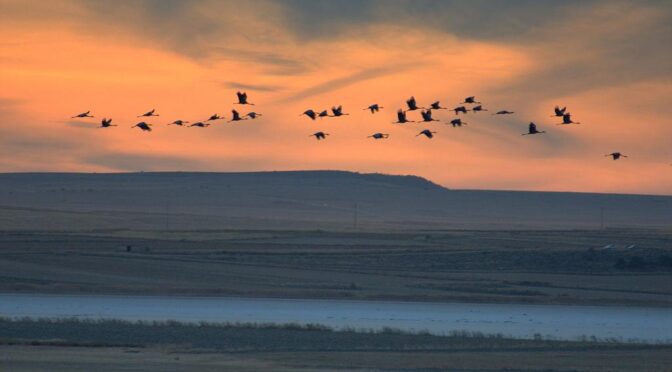 Without a doubt, one of the most distinctive living elements of the Laguna de Gallocanta are the birds, especially the striking flocks of common cranes that rest and feed here during the course of their migratory trips.

The vast majority of the European population moving on the western migratory route use Gallocanta as a resting area and over 100,000 cranes have been counted in a single day (02/24/2011) .

Flocks of common cranes arrive en masse at dusk. This has to be one of the most impressive visual and sound spectacles of nature.

Best times to visiting the area is during the months of November to February.

The protected area covers1.924 hectares of natural reserve (the wetland itself) and 4.553 hectares of peripheral protection zone (the surrounding farmland sometimes also wetland dependin on rainfall)

The Gallocanta Lake (Spanish: Laguna de Gallocanta) is an endorheic lake in the province of Aragon. It is within the boundaries of two provinces, Teruel and Zaragoza, and is located just to the south of Gallocanta village, between the Aragonese comarcas of Campo de Daroca and Comarca del Jiloca. This lake is situated on a high continental plain at an altitude of almost 1,000 m

Finda a hotel close to The Laguna de Gallocanta

Location: in an old road laborer’s house located on the A-1507 road, between the villages of Tornos and Bello. 120 km from Zaragoza and 95 km from Teruel.

The main content of the interpretation centre is the natural history ​​of the lagoon, its history and formation and the uniqueness of the species it provides a home for with special emphasis on the common crane. There is also an audiovisual projection and an interactive exhibition covering the geology of the lagoon, the habitat and human existence in the area.

Places to visit and parking

This footpath is circular and goes completely around the lagoon passing by the 5 observation hides and the Ermita de la Virgen del Buen Acuerdo from where there is also an excellen view of the Lagoon. This path can also be made by bike. Its not obligatory to do the whole footpath, just walk as far as you want then turn around.

This is a Linear path, which starts from the town of Berrueco and ascends to its Castle, from where you can see a magnificent panoramic view of the Gallocanta Lagoon.

Other lagunas in the area 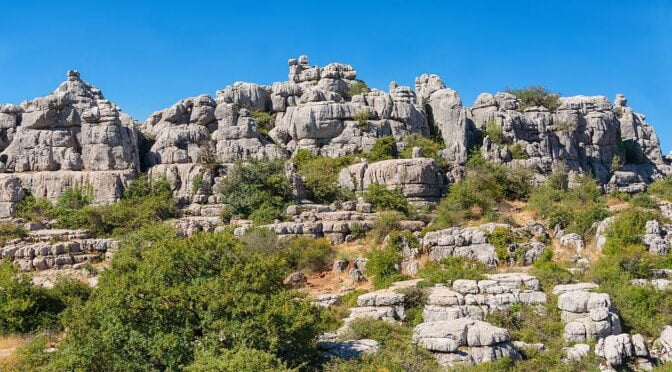 The dramatic and fascinating landscape of the El Torcal protected area is entrancing. Natural erosion has cut valleys and pathways through this enormous rock garden and created erratic sculptures in the process. Thin layers of rock stacked like pancakes are pinned down by massive blocks and this seemingly inhospitable terrain is host to many specialist rock loving plants.

This ‘Paraje Natural’ covers some 20 square kilometres of protected area and was first recognised for its singularity in 1929. The highest point in El Torcal is Camorro Alto at 1.378m above sea level.

Find a hotel close to the El Torcal protected area

This mountain was actually a sea bed during the Jurassic period and underwent great upheaval during the Tertiary period. Unusually the bedrock remained level whilst being elevated, creating an upland plateaux that is unique in southern Spain. Natural erosion over centuries concentrates on weaker areas with wind, frost action and dissolution by rain water constantly shaping it anew. Silt is released during this erosion and deposits in the valleys as a clay base, forming seasonally damp meadows that contrast with the jagged cliffs of limestone. These grassy areas hold a mixture of plant life such as celandines, narcissi, peonies, orchids, bluebells and thistles.

Two rock dwelling plants have taken their names from this area, they are Linaria anticaria and Dianthus anticarius, both are limited to a small area in the Baetic mountain range. Anticaria as part of the name refers to the old Roman name for Antequera in whose municipality the parkland lies.

There are some plants within the park that are on the Red List of endangered species: Atropa baetica and Sarcocapnos baetica subsp. baetica are in danger of extinction, whilst listed as vulnerable are: Saxifraga biternata, Acer opalus subsp granatense, Acer monspessulanum and Sorbus aria.

The Spanish Ibex (Capra hispanica pyrenaica) has become quite used to visitors here and may pose beautifully for you on a prominent rock.

Birds to look out for among the rocks are: Black Wheatear, Black-eared Wheatear, Red-billed Chough, Rock Bunting, Blue Rock Thrush, Black Redstart and Little Owl with wintering Alpine Accentors. Griffon Vulture, Eagles and Kestrels may be seen in the open skies while Eagle Owls find refuge amongst the cliffs.

There is only one road that leads into the parkland, it is accessed on the southern side of the mountain on the road between Antequera and Villanueva de la Concepción. This mountain road terminates at the visitors centre, Mirador (viewpoint) and car park from where the signposted walks begin. It is recommended not to wander away from the path as it can be very easily to get lost amongst the rock formations.

The Antequera Dolmens Archaeological Site, included in the List of World Heritage Sites of te Unesco, is made up of the Dolmens of Menga, Viera and El Romeral in Antequera, Malaga, and is considered one of the best and best-known examples of European megalithic complexes. Megaliths were the first forms of monumental architecture in European prehistory and were developed, according to data currently available, from the beginning of the 5th millennium BC, the Neolithic period, about 6,500 years ago.

“El Caminito del Rey”, in English, “The King’s little pathway”) was initially built as an access route. It enabled workers at the hydroelectric power plants of El Chorro Gorge and Gaitanes Gorge with an easier way to transport materials, maintain and inspect the workings of the two power plants. Construction of the “walkway” began in 1901 and was finished in 1905 and in 1921 King Alfonso XIII visited and walked along the path for the inauguration of the Conde del Guadalhorce dam and since that time it became known as the “Kings path”

The most recommended access is through the city of Antequera. Once in Antequera, follow the signs to “El Torcal” or “Villanueva de la Concepción”, until you reach the A-7075 mountain road. After passing the sharp curves of the “Boca del Asno”, near kilometer 42, turn towards the “Centro de Visitantes Torcal Alto“. At the end of this narrow road, there is the destination.

The access road from Málaga is the A-45, towards Cordoba-Seville-Granada up to Casabermeja exit. Take this exit and go on by A-7075 until “Villanueva de la Concepción”. When you arrive to this small town, you should continue in direction of “Antequera” until you get to the detour the “Centro de Visitantes Torcal Alto”.