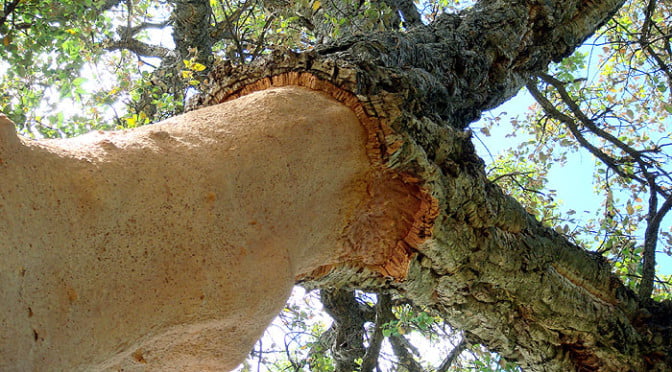 The region of Extremadura is about the same size as Switzerland and is made up of two large, sparsely-populated provinces – Cáceres and Badajoz. Passing through Extremadura you may well encounter areas containing splendid oak trees. They appear at first glance to be a natural landscape with majestic trees scattered over rolling hills, but in fact they are carefully cultivated and managed. This is the dehesa of Extremadura.

“Dehesa” is the name given to these expansive areas of farmland consisting of groves of low density, mature oak trees. The spaces between the trees are used to cultivate cereals and as pasture for grazing livestock.

Around 50% of the land of Extremadura, a region to the west of Spain bordering with Portugal, is taken up by these dehesas. This system of farming is unique to Iberia although similar in landscape to the savannahs of Africa.

The tree species is predominantly evergreen Holm oak (Quercus ilex) with Cork oak (Quercus suber) on richer, more humid soils and at the base of the mountains. There are also a number of dehesas using this style of farming with nature, in both Andalusia and Portugal. Several grades of tree coverage occur with the most open and more easily cultivated holding up to 15 oaks per hectare. An intermediate covering would have 15 to 30 oak trees per hectare and the densest plantings 30 to 50 trees per hectare.

Find a hotel in the dehesa of Extremadura

Created over thousands of years

Several thousand years ago the original forests were thinned out and the lower level of shrubs cleared and burnt, to open up grazing areas for livestock. The soil of this region is of relatively low fertility. Unable to support intensive agriculture and so a way of life adapted to make the best of what was available. In doing this the nature of the area has been less disturbed than in more modern farming practises.

The climate is Mediterranean, with dry, hot summers and cool, rainy winters. The oak trees were traditionally pruned out at the crown to create large horizontal branches forming a wider canopy and a heavier crop of acorns. This extended span offers greater shade and therefore protection to animal stock. The greenery was fed to the livestock while the wood could be made into charcoal for cooking. The falling leaves from the trees add fibre and fertility to the poor soil whilst the roots prevent erosion.

A different kind of crop rotation

Tree clearance, over grazing or yearly crop rotation would spell destruction for the dehesa of Extremadura as the soil would quickly be eroded in the heavy seasonal rains.

Land use is rotated using a combination of crop growth, rest, pasture and forestry, based on a 4 to 7 year cycle, this depending on the soil richness and precipitation. After a single crop of barley or oats (the latter most suited to drought) the soil is exhausted of nutrients and unable to produce a crop the next year, so it is rested and allowed to return to pasture.

Grasses and wildflowers quickly return and over the following years small shrubs such as cistus, broom, lavender and daphne will grow back. This gives a more natural look to these open groves and supplies food for bees, butterflies and other insects. Domestic cattle, pigs or sheep grazing the land and sheltering under the trees will provide a natural fertilizer in the form of their droppings. Once recovered, the cycle begins again, with the ground being cleared for another single season of cereals that can be harvested for the farm animals.

Sources of income in the dehesa of Extremadura

The varied sources of income from these extensive farms include cork stripped from the cork oak trees, honey from apiculture, timber and charcoal from pruning the trees, wool from the sheep flocks, leather hides, meat, cheese and the hunting of the wild game that lives through out such as wild boar, deer, rabbit, hare, pigeon and partridge.

The most lucrative of the domesticated animals at present is the black Iberian pig. This is a close descendant of the wild boar; they graze freely in small herds throughout the year and in autumn search out the tasty fallen acorns which give the cured hams “Jamon de bellota” their famed oaky flavour.

The cattle raised here are mostly bred for the bullring and the once lucrative Merino wool production of the area unfortunately saw a drastic drop in demand when Australian wool saturated the market place. It is due to the raising of both cattle and red deer that the dehesas are surrounded by tall fences.

A balance has been struck between man and nature that has proven to be acceptable to both. Wildflowers and animals thrive in vast areas that are infrequently visited.

However, with changing times and a need to create higher profits there is a risk that new farming techniques could be employed in order to gain more from the land. To achieve this tree removal with heavy use of fertilizers and irrigation would be needed, draining precious water and polluting the underlying aquifers with the run off.

A sensible alternative to this is eco-tourism, encouraged by the traditional, non-intensive methods of farming and beautiful landscape. The scenery alone is very attractive but then there are several important wild animal species withdrawing into these refuges that are bringing greater attention to the area as well.

Fauna in the dehesa of Extremadura

In Extremadura the most important fauna, due to their declining numbers, are the Spanish Lynx (Lynx pardinus), Spanish Imperial eagle (Aquila adalberti), Black stork (Ciconia nigra) and Black vulture (Aegypius monachus) each of these protected species requires a large territory.

These mostly privately owned dehesas average about 600 hectares (approx 1,500 acres) in size and run alongside each other, providing almost continuous woodland which is vital to the existence of these impressive creatures.

Given the rotation of land use the type of birds you may encounter will be varied. When there are crops or in more open terrain you may see Lark species, Corn bunting (Miliaria calandra), Serin (Serinus serinus), Bee-eater (Merops apiaster), Southern grey shrike (Lanius meridionalis) and Hoopoe (Upupa epops).

When the scrub grows back there will be a selection of warblers as well as Woodchat shrike (Lanius senator). In areas where the trees are denser there are Chaffinch (Fringilla coelebs), Song thrush (Turdus philomelos), Woodlark (Lullula arborea), Blackbird (Turdus merula) and Great spotted woodpecker (Dendrocopos major).

The famous wintering cranes of Extremadura

During the winter months up to 75% of the European population of Common cranes (Grus grus) arrive with around 60,000 birds flying in from Scandinavia, the Baltic area and Russia to feed off the grain and they are also very partial to acorns. From November to March they can be seen in small groups scattered through the dehesas but at night they congregate at the nearest reservoir. One such place to see them gathering is Embalse de la Serena and smaller connecting Embalse de Zújar. Just south of this is the Puerto Mejeral, a high point through which they can be seen flying evening and morning from roost to feeding grounds.

Flora in the dehesa of Extremadura

During the spring the fields are awash with bright flowers. Swathes form of blue Barbary nut iris (Gynandriris sisyrinchium), Spanish lavender (Lavandula stoechas), purple Vipers bugloss (Echium plantagineum), Hoop-petticoat daffodil (Narcissus bulbocodium) and Yellow chamomile (Anthemis tinctoria) to mention but a few. During the heat of summer all of these have completed their cycle, gone to seed and are resting before the winter rains encourage new growth. There are still occasional blooms to find such as Sea squill (Urginea maritima), Autumn squill (Scilla autumnalis), Autumn crocus (Colchicum lusitanicum) and Mediterranean daphne (Daphne gnidium).

Monfragüe National Park, Cáceres. This park has recently been upgraded from natural park status, this is due to the numerous endangered birds that live and nest within the park. The most outstanding of these being the Spanish Imperial eagle, Black vulture, Egyptian vulture, Black stork and Eagle owl. The park altitudes range between 450 – 750m, covering an area 30km long and 7km wide. The habitat types are oak woods, scrub land, rocky out crops, river and reservoir plus dehesa. The two rivers, Tajo and Tiétar, cut in from the east with their confluence inside the park. Rugged cliffs offer an ideal breeding ground for large birds of prey with extensive surrounding plains for them to feed off. Read More about Monfragüe National Park, Cáceres

Cornalvo y Sierra Bermeja Natural Park, Badajoz. This natural park is just outside Mérida. It holds a reservoir whose dam was built by the Romans in the II century. The landscape is of rolling hills with dehesa style farms the highest point only reaching 546 m at Pico Terrero. Areas of scrubland are dominated by tree heathers, bracken and cistus.

Casa Rural “El Recuerdo” which is ten minutes from the medieval town of Trujillo, offers some of Europe’s best bird watching with expert guiding. Six double rooms, each en suite, with a library of books on birds, flowers, butterflies and other wildlife. Set in a hectare of land with an organic vegetable garden and swimming pool. B and B or all meals can be provided.
http://www.casaruralelrecuerdo.com/2/index.html
https://www.facebook.com/CASARURALELRECUERDO

Finca Santa Marta is a country inn, near Trujillo, formerly an olive mill, composed of two country farms with 14 en suite rooms. The gardens and swimming pool are surrounded by olive groves, vineyards and orchards. Breakfast and dinner are served in the ancient olive oil mill with its 19th century hand-driven olive press.
https://fincasantamarta.es/en/finca-santa-marta-4/

Finca Al-Manzil consists of 22 hectares on Sierra de Montanchez, a protected granite mountain of beautiful holm oak woodland. The power for the two houses is generated by solar energy. A Barn which sleeps two is self catering and B&B service covers the 3 double rooms at the main house. The secluded pool runs with an eco-friendly salt water chlorinator.
http://www.finca-al-manzil.com/Finca-Al-manzil.htm
https://finca-al-manzil.blogspot.com/