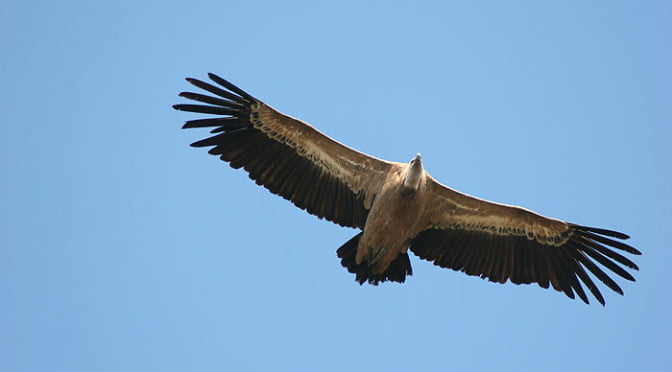 Visible all year in the natural park of Grazalema this bird is larger than an eagle, with a wingspan of up to 260 cm (8.53 Ft). In flight, their wings are broad, with the primaries (finger-like feathers) usually clearly visible; the tail is short, and the neck retracted. It has buff brown coloured plumage on the back, stomach and the anterior band of the wings, while the rest of the wing feathers and tail are dark brown. The head and long neck are covered with white down and there is a distinctive collar of long feathers.

On adults the bill is yellow and collar white, whilst on juveniles the bill is grey and collar pale brown. They feed on carrion, most of the time in a state of decay and at other times in an initial stage (especialy large mammals). The carcasses left out by farmers are also an important part of the diet of these birds.

They can often be seen in groups circling and rising higher on spiraling currents of hot air. The day is spent soaring at great heights, sometimes invisible to the naked eye, dropping from the sky with wings and feathers whistling when there is food available. The other vultures flying in the area see this manoeuvre with their extraordinary eyesight and very soon a large group of eager scavengers will gather near the corpse. On the ground, near the carcass, the vulture behaves very timidly. But once the feast has begun they engage in spectacular fights, some feasting well and others left hungry.

The The Griffon Vultures of Grazalema (Gyps fulvus – Buitre Leonado) live in colonies on cliffs faces. At dawn they can be seen on ledges waiting for the sun to warm the air and for thermals to form on which they can soar. Thus the vulture can fly all day using little energy. At dusk they return to their shelters, small ledges located preferably under a roof of rock and protected from the winds, where they spend the night. These ledges also serve to build nests on and raise chicks.

Breeding begins in December and finishes in April. When the nesting season approaches, the vulture pair will perform spectacular synchronised flights in which each individual will copy in absolute detail its pair’s movements. The Spanish term for the breeding colony cliff is ”buitreras”. Both sexes participate in nest building, making this from branches, straw and hair. The egg is laid in late January. Each pair has a single egg, incubation lasts about 52 days and is cared for by both parents. They take turns at intervals of 24 or 48 hours, never leaving it unattended. The young leave the nest in July or August. In the Iberian Peninsula the Griffon Vulture is a sedentary species that can be seen all year, but the juveniles sometimes migrate south for the winter and return in the spring.