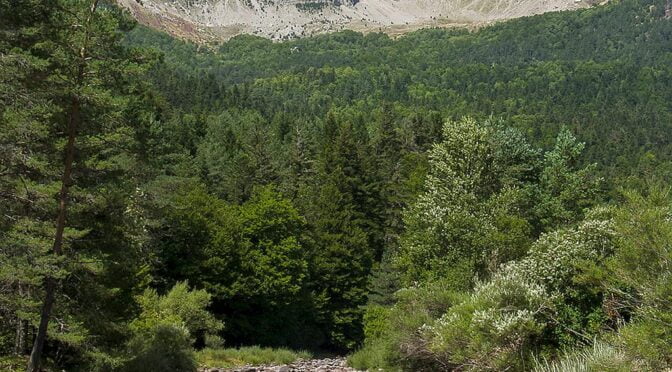 The Selva de Oza (Selba d’Oza in Aragonese) is a protected natural space located in the Hecho Valley (Huesca province), in the western part of the Aragonese Pyrenees . It is a natural space crossed by the waters of the Aragón Subordán river and surrounded by high mountain peaks between 2300 and 2700 meters. In the area the peaks of Peña Forca (2390 m), Punta Agüerri (2450 m), Castillo de Acher (2384 m) and Bisaurín (2668 m) stand out. )

The dense forest consists mainly of fir trees mixed with pine and beech and other species such as yew, maple and birch. In addition there is also huge variety of fungi, fruits and wild flowers.

Find a hotel in the Selva de Oza

Dolmens, the abbey and the remains of one of the ancient Roman roads of Antonino Pío

Some of the hiking routes allow you to discover traces that the ancient inhabitants left in the valley. One of the most interesting, due to its good conservation, is the dolmen in Aguastuertas, 1,600 meters above sea level (In the municipality of Ansó). it is accessed via the Selva de Oza, through the Guarrinza valley.

The Dolmen de Aguastuertas is one of many megalithic remains found in this area and around 80 monuments have been cataloged, creating what is considered to be the largest concentration of megaliths in the Pyrenean mountain range. In the Selva de Oza at the “Crown of the Dead”, there are also concentrations of huge stone circles that have been dated between 7000 and 5000 BC. Inside the stone circles, excavations have found flint arrowheads and small stone utensils that suggest that they are the remains of an ancient settlement used throughout history from prehistoric times to medieval times.

Buildings have existed at this site for centuries, possibly back to Visigothic times according to the excavations conducted in 1991. A Roman road (ruins of which remain today) passed nearby, connecting Zaragoza and Berdún (in the municipality of Canal de Berdún) to Béarn (France) through the 1,970 meter pass at Puerto de Palo. (More info at wikipedia)

The town of Valle de Hecho has an excellent information centre with everything you need to get the best out of a visit to the area.

They also have a facebok page
https://www.facebook.com/OficinaDeTurismoDeHecho

The Interpretation Center of Pyrenean Megalithism and Val d’Echo

OBLIGATORY VISIT! 🙂 To find the Interpretation Center of the Pyrenean Megalithism follow the road that leads to the Selva de Oza and after 8 kilometers you will find the old Forest House (antigua casa forestal) at the beginning of the Boca del Infierno.

The exhibition is also available in English and through projections, reproductions and interpretive panels, “you will enter one of the most exciting worlds that the ancient inhabitants of the Pyrenees designed and built.”

There is also a cafe bar on site.