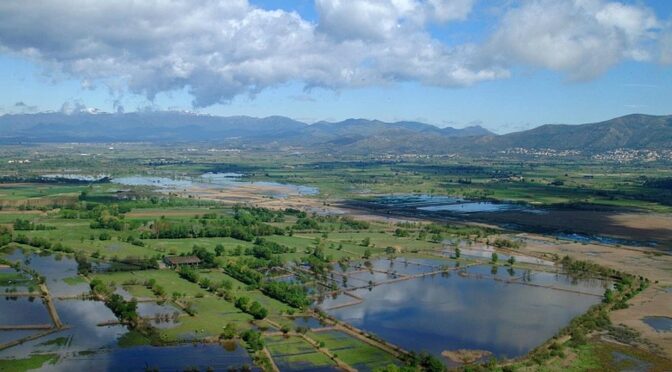 Aiguamolls de L’Empordà Natural Park forms part of the Bay of Roses and the marshland lies between the two Rivers Fluvià and Muga. It is the second largest wetland in Catalonia, the Ebro delta being the largest.

During the 19th century, much of the marsh was drained as canals were created and the land converted to agriculture. However, some marsh and dunes remained untouched and was given Natural Park status after a campaign to save the area from development by various local organisations and ecologists.

There are there are three nature reserves called Les Llaunes, Els Estany and Illa de Caramany with dune systems, marshes, freshwater ponds, rice fields, reed beds hosting great biodiversity especially in bird life where over 300 species have been recorded and almost 100 species nesting in the area.

Find a hotel in the Aiguamolls de L’Empordà Natural Park

In front of the coasts of the natural park there is a relatively shallow area of ​​marine waters, with a sandy bottom with fine and coarse sand. The protection offered by the Gulf of Roses provides shelter when the north wind is strong. However, when the east wind blows , it hits the park’s coastline shaping the dunes.

They appear on the entire coastline of the park and are the only virgin beaches left on the entire Costa Brava . The elongated extension to the south along the perimeter of the park preserves a representative sample of this type of habitat.

The coastal brackish lagoons, locally called llaunes , are located behind the beach, between the mouths of the Muga and Fluviá rivers . The vegetation that surrounds the lagoons, formed by low plants, adapted to salinity, such as reeds, is locally known as salsura .

In Ampurdán some typical meadows of this region are called closes (closed), surrounded – closed (closos) – by drainage ditches and by riverside trees (elm, ash, poplar, alder and others). They occupy the bed of ancient lagoons and normally flood in the rainy season. Other fields and pastures of this type, elongated, narrow, closed with tarayes, are called peces (pieces) or feixes (terraces).

Theses are the remains of the old Lake of Castellón de Ampurias . The most emblematic is that of Vilaüt . Its interior situation, far from the sea, means that its waters do not have any saline influence and has a vegetation adapted to immersion, flooding and humidity, according to the depth of the water. The natural park has promoted the recovery and creation of new lagoons, such as Cortalet and the “Europa” lagoons.

Apart from the Muga and the Fluviá, the two largest rivers in the park, in the marismas there is an extensive network of tracks and ditches. The riverside vegetation has an evident botanical and fauna interest and the Integral Reserve of almost 6 hectares on the Island of Caramany is an ideal habitat and is home to many species.

Arable crops occupy a large part of the park’s surface. Winter cereals (barley and wheat) and alfalfa, corn, sorghum, sunflower and fruit trees. Rice, the cultivation of which has been recovered since the park was created, is the most adapted to the marshy areas of the Empordà lowlands.

Located between the plain and the nearby Sierra de Verdera, to the northeast, the Aspres occupy gently undulating terrain. They have rainfed crops (such as vineyards), scrub and grasslands, cork oak, holm oak and oak groves, as well as pine woodlands in some areas, such as Torre del Viento (Torre del Vent), the highest point in the park.

On saline soils specialized plants, usually with succulent and fleshy leaves, such as Arthrocnemum and Atriplex halimus are accompanied by Juncus maritimus and Spartina patens. During the months of May and June they are filled with flowers of the yellow lily (Iris pseudacorus).

In the coastal and sandy areas we can find Agropyron junceum and Ammophila arenaria which grows on the dunes.

The sedimentation and clogging areas of the Fluviá and Muga rivers are crossed by a set of drainage channels that have a particular vegetation in which reed beds and related botanical communities predominate. The most characteristic plants of these habitats are Phragmites australis, Typha angustifolia and T. latifolia, Schoenoplectus lacustris , Iris pseudacorus ), Alisma plantago-aquatica, Althaea officinalis and Lythrum salicaria. At some times of the year, fresh water floods meadows where cattle and horses graze and cypress grass (Carex riparia and C. otrubae ) can be found, as well as marsh rush (Eleocharis palustris).

The Marismas del Ampurdán in the Aiguamolls de L’Empordà Natural Park are one of the natural spaces in Catalonia and Spain in which there is a greater variety of animal species . The birds make the Marshes their refuge and resting place. There are more than three hundred species, many of them protected and they constitute the main wildlife attraction. 329 species have been cited, 82 of them nest regularly. Species linked to aquatic environments are obviously the most abundant.and include mallard (Anas platyrhynchos), moorhen (Gallinula chloropus), wagtail (Motacilla flava) and common warbler (Acrocephalus scirpaceus). In smaller numbers, Little Grebe (Tachybaptus ruficollis), Bittern (Botaurus stellaris), Little Bittern (Ixobrychus minutus), Purple Heron (Ardea purpurea), marsh harrier (Circus aeruginosus), common coot (Fulica atra), common stilt (Himantopus himantopus), plover (Charadrius alexandrinus) and kingfisher (Alcedo atthis).

The Garganey or ànec roncaire in Catalan (Spatula querquedula) and the lesser shrike (Lanius minor) are two of the most emblematic species in the park. The Garganey is the symbol of the park.

The white stork (Ciconia ciconia), which nested occasionally in the area now has a growing population thanks to a recovery project that started in 1987. The purple swamphen (Porphyrio porphyrio) has also been reintroduced as it had all but disappeared in the middle of the twentieth century. The population has recovered from specimens released in 1989 and 1991.

During the months February to June and July to October, thousands of migratory birds use the marshes as a stage to rest and feed. In springtime, with a northerly wind, in the second half of April and the first days of May is when the greatest number of species are seen. Among the most characteristic migratory birds are Squacco Heron (Ardeola ralloides), Flamingo (Phoenicopterus roseus), Garganey (Spatula querquedula), Osprey (Pandion haliaetus),Red footed falcon (Falco vespertinus ) and Audouin’s gull (Larus audouinii). Among the waders, up to thirty-two species are regularly seen, some of the most abundant being little plover (Charadrius dubius), Little Sandpiper (Calidris minuta), Common Sandpiper (Tringa totanus) and Wood Sandpiper (Tringa glareola).

The most typical of the marshes, in addition to the water rat (Arvicola sapidus), is the rarer otter (Lutra lutra) which until the end of the 20th century was very common and is now being reintroduced to the area. Also present are weasel (Mustela nivalis), European polecat (Mustela putorius), badger (Meles meles), fox (Vulpes vulpes), genet (Genetta genetta ) and roe deer (Capreolus capreolus). The wild boar (Sus scrofa) population has increased substantially over the last few years and is one of the species that abounds throughout the park. Small mammals like the vole , shrew , rat and mouse are found all over the park and rabbit (Oryctolagus cuniculus) is abundant in some places. There are also thirteen species of bat recorded in the area they contribute hugely to the control of insects, particularly mosquitoes.

The El Cortalet Information Center, the main office for the natural park, is well worth a visit first before you start to explore the various footpaths and observation points. The centre has knowledgable local staff who will supply you with maps and other information about the wildlife in the area.

Address: On the GIV-6216 road towards Sant Pere Pescador, 4 kilometres from the town of Castelló d’Empúries.

Opens around 10 am every day except Mondays (unless its a bank holiday). Also closes on 1st and 6th of january, 11th of September and 25th, 26th of December