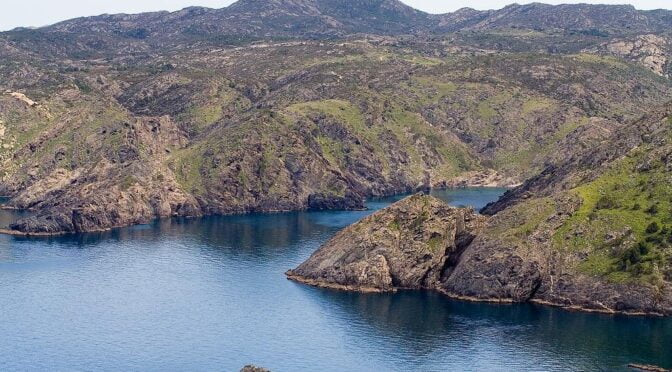 The Natural Park of Cabo de Creus is a peninsula and a headland located at the most northeastern point of the Iberian Peninsula and was the first maritime-terrestrial park created in Catalonia. The peninsula has an area of around 190 square kilometres and is a windbeaten, very rocky, dry region, with almost no trees. The area is frequently swept by the awful north wind called the “tramontana” (beyond the mountains). The 11th-century monastery, whose first structures date from about 750 AD, Sant Pere de Rodes stands out at 500 metres of altitude and has lovely views of the Cabo and the Pyrenees.

Cadaqués is the most well known village in the Cabo de Creus Natural Park and is home to artists and writers whilst nearby in Port Lligat Salvador Dalí built his home in a small bay. (Dalí depicted the peninsula in his paintings The Persistence of Memory and The Great Masturbator).

Find a hotel in the Cabo de Creus Natural Park

Human activity and the peculiar climatic factors of the Cabo de Creus Natural Park determine the vegetation cover. A part of the land is a huge abandoned vineyard, settled on terraces supported by stone walls. After that, the use of the land for farming and livestock grazing has drastically changed the landscape. In addition, the frequency and persistence of strong winds, especially from the north, dries the environment and contributes salinity levels to the plants that have to adapts to their environment.

There are very few trees but the most frequent are the Aleppo pine (Pinus halepensis) and the cork oak (Quercus suber). beside streams there are elm (Ulmus minor), ash (Fraxinus angustifolia), alder (Alnus glutinosa), hazelnut (Corylus avellana) or willows (Salix sp.). Holm oak (Quercus ilex) and downy oak (Quercus humilis) appear in the shadiest and most sheltered places.

Maquis scrubland occupies most of the surface area and the most frequent species are Pistacia (Pistacia lentiscus), juniper (Juniperus oxycedrus), white and broom heather (Erica arborea and E. scoparia), Cistus such as (Cistus monspeliensis, C. salviifolius and C. albidus), and gorse (Calicotome spinosa).

In the coastal zone we find the plants most adapted to the wind and salinity. Without a doubt, they constitute the most interesting vegetation in the park not seen elsewhere on the Catalan coast. The most characteristic species are armeria (Armeria ruscinonensis), sea-lavender (Limonium tremolsii) and Seseli farreny an endemic to the Cabo de Creus Natural Park

Interesting invertebrates on the Cabo de Creus Natural Park are a beetle Pseudochlamys raholai and a snail Mastigophallus rangianus which is endemic to the area.

Amphibian populations are very well represented with populations of almost all species present in the country, from the southern tree frog (Hyla meridionalis) to the common toad (Bufo bufo).

Interesting to note is the the presence, although scarce, of the Mediterranean tortoise

The GR-11 connects El Port de la Selva with Cadaqués and starts from the hermitage of Sant Baldiri taking about six hours to complete.

One of the main attractions of the Cap de Creus Natural Park is the monastery of San Pere de Rodes, a true jewel of Catalan Romanesque art, built during the 10th-12th centuries and which has recently undergone major restoration works. The landscape that can be seen from the surroundings of the monastery is stunning and a climb the nearby mountain of Saverdera gives a magnificent panorama that includes the Gulf of Roses and Cabo de Creus itself. Further in the distance there are views of Els Aiguamolls de l’Empordà Natural Park, the Empordà plain, the Garrotxa mountains, La Albera Natural Park and the Pyrenees with its imposing Canigó massif.

On Saverdera, the remains of the castle of San Salvador are still well preserved.

The number of castles and hermitages, both in the Park and in the surroundings, is also very high. Among others, the spectacular and strategic castle of Carmençó (Vilajuïga), that of Bufalaranya, and of Puig-rom (Roses), the picturesque and elevated hermitage of San Onofre (Palau-saverdera), the pre-Romanesque of San Martí de Vallmala (Llançà), the hermitages of Sant Sebastià (La Selva de Mar and Cadaqués), Santa Helena and St. Baldiri (El Port de la Selva).

The towns on the immediate outskirts of the Park contain highly valuable archaeological and monumental values, such as the Ciutadella de Roses with its gates and bastions, remains of the Santa Maria monastery and vestiges of the first Greek foundation of Rhode, the great parish temple of Cadaqués, with an important Baroque altarpiece and the Romanesque temples of Palau-saverdera and Pau.

You can find information about the Natural Park at the Information Center located in the monastery of Sant Pere de Rodes, Palau de l’Abat, El Port de la Selva.

The official website for the Cabo de Creus Natural Park is here
http://old.parcsnaturals.gencat.cat/es/cap-creus/index.html