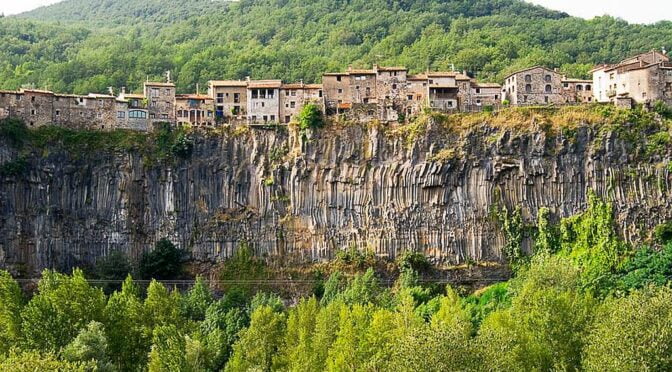 The Garrotxa Volcanic Zone Natural Park covers a holocene volcanic field (also known as the Olot volcanic field). The volcanos (about forty within the park) are no longer active and the last eruption (Croscat) occurred around 11,000 years ago.

The region is still seismically active, though, and a large earthquake in 1428 caused damage to buildings and twenty deaths in Barcelona. More recent earthquakes in 1901 and 1902 caused shaking but little damage.

The Garrotxa volcanic field is “monogenetic” with each volcano representing a single period of eruption. The field became active about 700,000 years ago and is the most recent example of volcanic activity in northeastern Spain which dates back to around 10 million years. There are 10 craters, 23 highly conserved cones and more than 20 basaltic lava flows. The cones range between 10 and 60 m in height and between 300 and 500 m in diameter. The terrain in the area is medium mountain, ranging from the 200 m high of Castellfullit de la Roca to the 1,100 m of Puigsallança, the highest point of the Finestres mountain range.

The main area is the plain or flat of Olot and the lava field occupies about 25 km² of the plain, . The magma flowed following the valley of the river Fluviá and reached San Jaime de Llierca .

Another important sector is constituted by the tectonic valley of the Ter River at the foot of the fault scarp of the Corb and Finestres mountains where the most important volcanoes are found (Santa Margarita and Croscat). In this case, the lava followed the valley along the river slope to the Gibert Mill, past the municipality of El Sallent de Santa Pau.

Croscat is the largest volcano on the Iberian Peninsula (with a height above sea level of 786 m), the crater is 160 m high, 600 m long and 350 m wide. It is also the youngest since its last eruption dates back to 11,000 years ago in the Upper Paleolithic.

The soil and the atlantic climate provide a varied and diverse vegetation with holm oak and beech forests creating an exceptional landscape. The park is home to well over 1000 species of plants and the large beech forest Fageda d’en Jordà or Hayedo de Jordá stands out that is special because it grows on a plain at only 550 m of altitude. Presumably this is possible due to the high humidity in the area and the large capacity of volcanic rock drainage.

This volcano stands in the centre of the town of Olot and is aligned with the volcanoes of Montolivet and La Garrinada.

The old town conserves its old street layout with historical buildings and monuments built after the earthquakes of 1427 and 1428. there are various museums and information centres here and all are well worth a visit.

At Molí Fondo you can see three lava flows that flowed down this stretch of the river valley. The lava flows originate from different eruptive sources and each successive flow has covered the previous one.

The Parc Nou (‘New Park’) is the municipal park and with the interesting Art Nouveau building of Torre Castanys in its midst. It houses a park information centre, where you can prepare a stay in the area and learn about the typical plant life of the Olot Basin. The Botanical Garden holds a spectacular English oak woodland (Quercus robur) and a garden of local medicinal plants.

A rural area farmed and then abandoned. The area has been restored and consists of various footpaths, dry-stone walls, small cleared fields and stone-huts.

One of 26 natural reserves in the Garrotxa Volcanic Zone Natural Park , La Fageda d’en Jordà is a beech wood growing on the lava flow emitted by the volcano Croscat that lies within the municipalities of Santa Pau, Olot and Les Preses. This is an an exceptional beech forest (Fagus sylvatica) growing on the lava flow emitted by Croscat, dotted with blisters (tossols) at an altitude of 550 m.

The buildings in the town are built mostly from volcanic materials. The paving and urban furniture of the old town is made from basalt, a rock formed when lava cools. The 40-metre high basalt cliff was formed by two lava flows originating from volcanoes around Olot and Begudà.

A stroll through the old quarter of the village of Santa Pau reveals its unique buildings. On a clear day from the eastern part of the village there are splendid views down the Ser Valley as far as the seaside town of Roses and the mediterranean

The old quarter of Sant Feliu de Pallerols and the surrounding areas are worth a leisurely visit. There are various walks providing access to the town’s most interesting spots.

An information centre promoting the main attractions and places of interest that constitute the heritage of Sant Joan les Fonts and La Garrotxa.