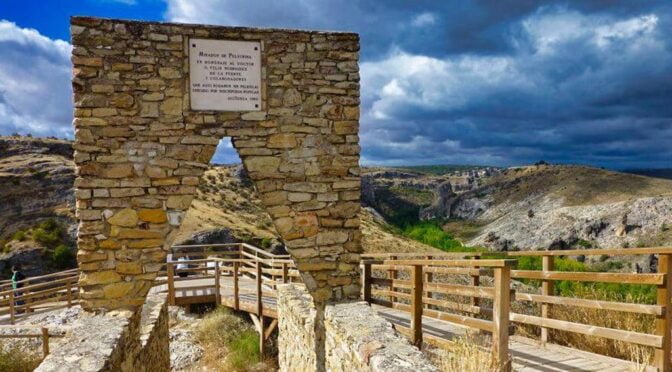 The impressive ravine is the result of the erosion on Mesozoic limestone, dolomites and paleogene outcrops. During the Cretaceous period the area was frequently covered by seas which deposited the current limestone. More recently, in the Quaternary, the river has been dissolving the limestone and eroding the current canyon.

This spectacular landscape was popularized by the famous naturalist Félix Rodríguez de la Fuente as it provided the ideal setting for a number of his television wildlife documentaries. (Especially those dedicated to eagles)

The viewing area over the gorge is dedicated to him. (Félix Samuel Rodríguez de la Fuente (March 14, 1928 – March 14, 1980) was a Spanish naturalist and broadcaster. He is best known for the highly successful and influential TV series, El Hombre y la Tierra (1974–1980)

There is also an isolated population of the endangered Pyrenean desman (Galemys pyrenaicus) The river is an ideal habitat for birds such as the white-throated dipper (Cinclus cinclus), grey wagtail (Motacilla cinerea) and kingfisher. The Mediterranean water shrew (Neomys anomalus) is also present

In the woodland and moorlands there are roe deer (Capreolus capreolus), wild boar (Sus scrofa ).

Located in the village of Mandayona the exhibition dedicated to the natural resources of the park is influenced greatly by the work of the famous Spanish naturalist Félix Rodríguez de la Fuente.

There are live cams showing vulture nests and excellent information on the fauna and flora of the area. This is also the place to get your infomation for walking in the area.