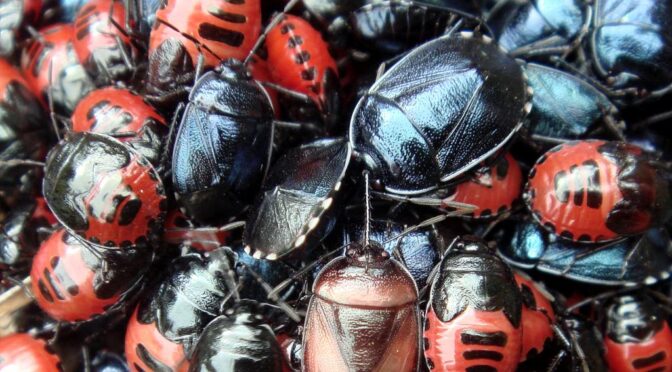 Beetles and bugs are classified Coleoptera (beetles) and Hemiptera (bugs). There are literally thousands upon thousands of species of these fascinating little creatures that have an important role in the bio diveristy of the natural world.

Some common bugs include aphids, cicadas, water striders, stinkbugs and spittlebugs. (The above image is of the bugs canthophorus melanopterus nymphs in a large group)

Differences between beetles and bugs?

Bugs eat a liquid diet of nectar, sap or animal fluids. Their beak-like mouthparts inject digestive chemicals into whatever the bug is dining upon and as the chemicals break down the food, it is turned into a liquid that the bug can drink.

Unlike bugs, beetles possess chewing mouthparts to eat anything from fallen leaves and dung to your grandmothers favorite armchair, rotting wood or the roof beams in your house!.