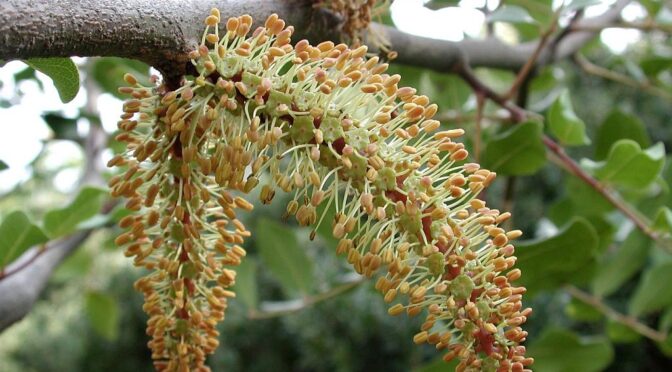 The Carob Tree – Ceratonia siliqua – Algarrobo is a long lived tree which grows to a height of around 12 to 15 metres and extends to a wide canopy. It is native to the Eastern Mediterranean area where it thrives in arid conditions but is also cultivated commercially in warm climates as the pods have an important economic value that has been known for at least 4,000 years.

It is an evergreen tree with oval glossy green leaves and a short wide trunk which on mature specimens is rough and gnarled. The scientific name of the carob tree, Ceratonia siliqua derives from the Greek word keras, meaning horn, and the Latin siliqua meaning pod, alluding to the hardness and shape of the pod. It is a member of the botanical Fabaceae family of plants (leguminous beans and peas).

Carob flowers and fruit grow out of older branches, twigs and even the trunk of the trees. (This botanical phenomenon is known as “cauliflory”.) The flowers are insignificant as they have no petals (similar to catkins) and are green/yellow or red in colour, these being mostly on separate male and female trees. The pollen from the male flower needs to be distributed by insects to the female flowers from which the beans then develop. The carob tree flowers in September and October with the developing carob pods slowly gaining the appearance of green broad beans. It takes 11 months to develop into a pod that is flattish, shiny brown and around 15 to 20cm long.

The Carob tree produces little fruit until it reaches15 years old, although it can live for 100 years with a large tree producing one ton of beans in a harvest. It is now grown commercially in Spain, Portugal, France, Italy, Africa, California, Arizona, Mexico, South America and Australia,

A long hot summer ensures a plentiful crop of the long beans which are collected by hand from the tree or later from the ground after they fall. Many small-holdings in Spain will still have a carob tree to give a supply of fodder to their animals through the winter. They are also gathered and taken to agricultural co-operatives for bulk re-sale.

The seed pod or bean is thick and glossy from a healthy tree. The interior consists of multiple, disc like, brown seeds set in a sweet pulp. The washed carob pod is kibbled (coarsely ground) to separate the pod from the 5 to 15 seeds. When the seeds are removed, the pod is further kibbled to various grades for animal feed and even more finely to produce chocolate-like flour that is used in all sorts of carob preparations.

The seeds are ground down with the resulting powder being used as a natural additive. This contains galactomannon, a commercially valuable carbohydrate that is used as a thickener, emulsifier and stabilizer in many products. It is known as E410 (LBG locust bean gum) and incorporated into foods such as ice-creams / cream cheeses / sauces etc to help thicken them whilst keeping the mixture smooth. It has a similar use in the production of textiles, paints and to lesser extent paper products. Spain is the main producer of Locust Bean Gum.

There are only a dozen or so production plants creating LBG which has a worldwide demand of around 35,000 tonnes of carob seed per year.

The sweet carob pulp taken from the pod is ground into a powder which is gaining popularity as a healthy alternative to chocolate as it is free from the stimulants caffeine and theobromine. Carob products contain substantially less sugar than their chocolate counterparts as it is already naturally sweet. Carob powder, found mostly in health food shops, can be substituted for cocoa powder in any recipe. This substitute is often used to create snack bars for people who are diabetic.

It is popularly believed that John the Baptist, later known as Saint John, sustained himself while traveling in the wilderness. by eating carob pods. (The debate is as to whether it was locust beans as they are sometimes called or locusts the insects.) Therefore, giving rise to another common name for the Carob tree, “Saint John’s Bread”.

The seed pods and gemstones

The seeds within the pods are of a uniform shape and size, so much so that it is thought they are the original standard weight for gemstones used by jewellers and goldsmiths. Carob seeds weigh between 197 and 216 milligrams, 200 milligrams is the standardized “carat” weight of diamonds brought in at the beginning of the twentieth century.

Read about other interesting tree species in Spain here.