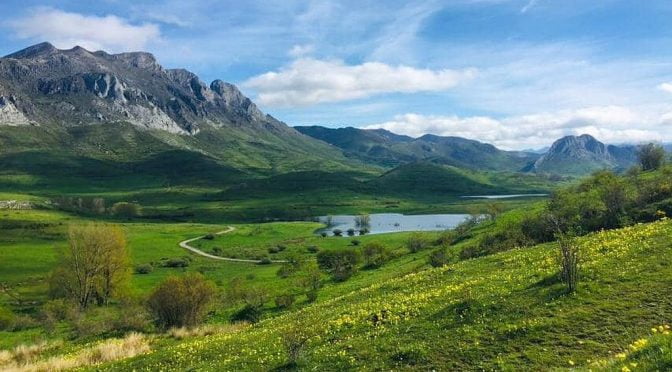 El Alto Bernesga Biosphere Reserve (named after the river, rich in trout, that flows through the territory) is comprised of two municipalities and located on the Leonese slopes of the Cantabrian massif. The municipality of Villamanín is made up of 19 small towns and villages in the northern half of the reserve and La Pola de Gordón, with its 17 towns and villages occupies the southern half.

A mountainous terrain, the Alto Bernesga is outstanding for its varied species of flora and fauna endemic to the Cantabrian Mountains. Species of interest such as the otter or Pyrenean desman can be found in the rivers and, this area, (like the neighbouring biosphere reserve of Los Argüellos) is also a vital passage connecting eastern and western populations of brown bear. Iberian wolf are also present in good numbers.

The rocky mountains here provide a refuge for birds of prey such as golden eagle and Egyptian vulture whilst forests of oak, juniper, beech and birch are home to the endangered capercaillie.

Look out on the cliffs for the Pyrenean chamois (Rupicapra pyrenaica). Up to 80 cm tall, its summer coat is a ruddy brown; in winter, it is black or brown, with darker patches around the eyes. Both males and females have backward-hooked horns up to 20 cm in length. They browse on grass, lichens and buds of trees. Sure-footed and agile, they are found on any elevation up to 3000 m

The entirety of this area is included within the Central Mountain of León Site of Community Importance (SCI) and is also within the Natura 2000 Network (Ecological Network of Biodiversity Conservation Areas in the European Union). In addition, two of its zones are within two Important Bird Areas (IBA): IBA Babia-Somiedo (Chagos core area) and IBA Central Sierras of the Cantabrian Mountains (Casomera core area).

Human activities in El Alto Bernesga biosphere reserve are mainly those related to livestock rearing which has a great importance in creating and maintaining the landscape. Look out for the traditional brañas, ancient shelters used by farmers for both themselves and their livestock.

The City Council of La Pola de Gordón has been part of the Network for Cooperation of Cities on the Ruta de la Plata, an association that is in charge of protecting and disseminating all the heritage linked to it.

In ancient times there was a route, which used a natural corridor allowing the Tartessian people to trade with the north of the plateau in the 7th century BC. It was this route that the Roman troops used to advance towards the north. At the time of Emperor Augustus and especially during the government of Trajan and Hadrian, it was configured as a Roman road that in its beginnings linked Emerita Augusta (Mérida) with Asturica Augusta (Astorga), and which continued through to Sevilla in the south. From Gijón via La Vía Carisa it gave access passage to Asturias and the Cantabria Mountains.

This route has been used throughout the more recent centuries, both by Arabs and Christians during the Middle Ages. At present it continues to be an important communication route for the Peninsula. There is a dedicated website for the Ruta de Plata here: https://rutadelaplata.com/en/

The Ruta de San Salvador constitutes the northern variant of the Camino de Santiago, which starts from the Royal Collegiate Church of San Isidoro in León and reaches the city of Oviedo to visit the Chapel of San Salvador, continuing west on the way to Santiago de Compostela .

The current route goes from León to Oviedo following a route almost parallel to the Bernesga River, to Arbas del Puerto, where the Collegiate Church of Santa María is one of its great landmarks. It continues through the mountain pass of Pajares and goes down the northern slope of the Cantabrian Mountains following the course of the Lena and Caudal rivers with their confluence with the Nalón.

Mining has been an economic resource of great importance since ancient times, at least two pre-Roman exploitations and a certain number of mines that extracted copper, nickel, cobalt and villamaninite can be cited, this last mineral was discovered in the municipality of Villamanín.

Coal mining began in the mid-19th century and the Bernesga mining basins were one of the benchmarks for coal reserves. A large part was not exploited due to the absence of an adequate railway system but with the construction of the coal train, the meter gauge railway between La Robla and Valmaseda, inaugurated on August 11, 1894, the door was opened for the development of the Ciñera mining basin.

Mining continues in the protected area much to the disgust of various ecological protection groups and platforms and there are various legal ongoing arguments trying to stop the expansion and opening/reopening of various types of mines.

There are some excellent opportunities here for hikers and walkers. The scenery is simply stunning and reccomended times are spring, early summer and autumn. The wikiloc website has almost 100 of the areas routes mapped: https://www.wikiloc.com/wikiloc/user.do?id=5849029

The visitor center of El Alto Bernesga biosphere reserve is located in the old school houses in the village of of Geras de Gordón.

The visitor center is well laid out with diverse information about the area including: