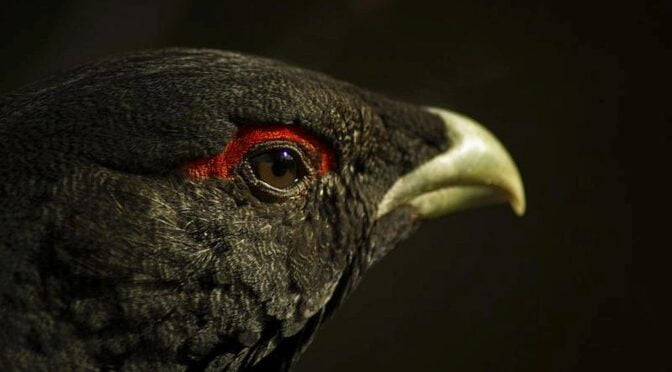 There are, however, sad signs that some of the sub species are threatened, especially the Spanish Tetrao urogallus cantabricus – Cantabrian capercaillie – Urogallo cantábrico.

There are two sub species in Spain

Imminent extinction for the Cantabrian capercaillie

Having been declared in danger of extinction in 2018, the latest survey reveals that there are less than 300 individuals left in the Cantabrian mountains and very few of these are reproductive males. This brings the number below the minimum for a viable population for the survival of the subspecies which has already disapeared from Galicia and Cantabria. The remaining bulk of the surviving birds are located in León with a few also still present in Asturias.

The cause for the decline in numbers has various factors such as the impact of human activities, infrastructure, forest fires, illegal hunting, crashes with power lines and habitat fragmentation. Added to this, in breeding, a low birth rate and also a high mortality rate of hatchlings can be pointed out.

However, one must not forget that this species was hunted legally up to the 1980’s and then heavily poached pretty much up to present day. The male, due to his size was coveted by hunters and the results of this indiscriminate hunting are now plain to see.

As early as 2007, a captive breeding programme was set up in the Asturian locality of Sobrecobio but since that date very few Cantabrian capercaile have been released into the wild. Even volunteers from various ecological groups such as SEO/BIRDLIFE have been blocked from entering of finding out what the project entails and the methods being used. In 2020 records published showed that just 13 eggs were produced by the captive individuals with only 4 hatchlings that went on to die within the first weeks of life.

Something is obviously not right when one looks at the Scottish successes of captive breeding and re introduction and most people are pointing the finger at the bad management practices at the centre.

Un undated (maybe 2017?) report on the official website of the The Life + Cantabrian Grouse program publishes that 5 female birds were released into the wild with four dying quite quickly and the 5th losing transmitter signal so its fate is unknown. The overall message of the report is positive and no mention is made of the project failing either now or in the future. You can read the report in English here: https://lifeurogallo.es/en/content/results

The situation in Castilla y León

The news is slightly more positive in Castilla y León where there is a new recovery project being developed to adapt power lines in capercaille habitat and also there are plans for a new captive breeding center for in Valsemana (León). However, although announced at the beginning of 2021 the breeding centre still has not been created so time will tell what the fate of the Cantabrian capercaillie will be here.

Tetrao urogallus cantabricus – Cantabrian capercaillie – Urogallo cantábrico thrives in places where humans do not go and that can be demonstrated by the habitat where the species is more abundant across Europe. They really need the zero presence of humans, cattle and deer; the lack of forest or livestock tracks, other infrastructures and especially power lines.

One of the big debates has been whether or not to introduce males into the Cantabrian Mountains from the Pyrenees where there are more than 3,000 individuals at the last census ( in France the species is abundant and still classified as a hunt species). Of course if males of the other Spanish subspecies Tetrao urogallus aquitanicus are introduced, this will of course be another nail in the coffin for Tetrao urogallus cantabricus.

Strong criticism has also come from many sectors about the money spent in recent years on actions to try to recover the population of the species, especially in the Life + Cantabrian Grouse program where over 6 million euros has been invested. Without doubt full transparency and cooperation with experienced organisations will be needed if this project continues. Right now though, the future looks pretty bleak for the Cantabrian grouse.

There is an official video from the The Life + Cantabrian Grouse program official website but I always find it suspicious when comments are not enabled. I suppose they don’t want any negative comments posted. 🙂

In Spanish, SEO/BirdLife also has an information page: https://seo.org/ave/urogallo-comun/

Feel free to leave any comments or join in with the conversation about the Cantabrian capercaillie over at the Iberia Nature Forum: https://iberianatureforum.com/forums/topic/future-not-good-for-the-cantabrian-capercaillie/