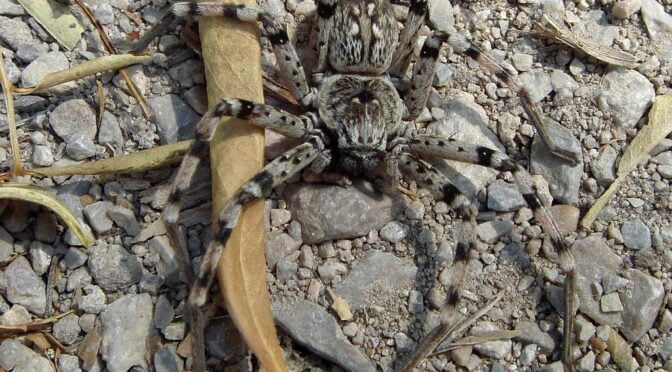 The giant crab spider, also referred to as a huntsman spider, is quite common and one of the largest to be found on the Iberian Peninsula. It has a base colour of grey to light brown, the colours and patterns vary greatly. In general the thorax has a fine, pale central line and the abdomen has a brown central streak flanked by a darker margin. The underside of the abdomen has two characteristic dark stripes.

The very long legs tend to be held sideways, grouped closely in a crab-like stance. They are the same as the base colour of the body with marked dark rings. They are fast, agile climbers and can jump.

These are terrestrial spiders which do not build webs,. They do, however, build a shelter pocket of strong silk in which they remain during the day.

These pockets are also used for moulting and for reproduction. They are usually attached to a flat surface such as under rocks, in soil cavities and in old walls, with a preference for sunny areas. They leave their shelter at night to hunt.

(Eusparassus walckenaeri or the Eastern huntsman crab spider is not present in iberia and can be found in areas such as Cyprus, Greece and Turkey).

There is an excelent study of both species available in PDF format that does include some text in English but is mostly in Spanish.

Data for a better knowledge of the genus Eusparassus in the Iberian Peninsula are presented. Diagnostic and morphological characters for distinguishing the genus are given. The type species, Eusparassus dufouri Simon, 1932, is reported, and the male is illustrated for the first time.

Summarized information on taxonomy, phenology, habitat and geographical distribution is presented for both species.
http://sea-entomologia.org/gia/ria_12_99_115.html