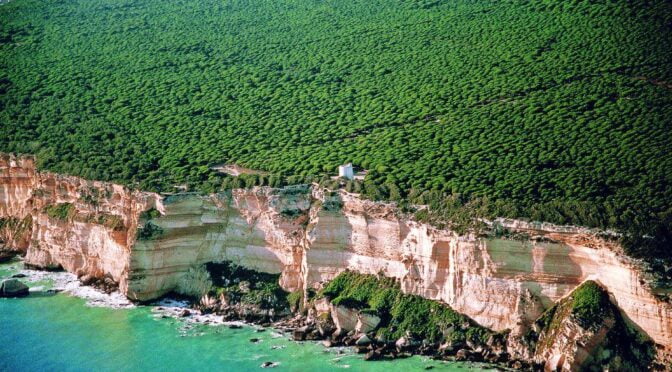 Halfway between The Bay of Cadiz and El Estrecho between Mediterranean and Atlantic waters is the La Breña y Marismas de Barbate Natural Park.

Although one of the smaller parks in Andalucia it has 28km of marked pathways and covers both land and marine areas. 100 metre cliffs drop vertically into the powerful Atlantic ocean. Above the cliffs is a dense woodland of Stone pines (Pinus pinea) which create a naturally rounded canopy of shade. As well as the pine woods and marine zone there are moving dunes and wetland where the Barbate river reaches the Shore.

Freshwater cascades fall from the cliffs and when the tide is out you can walk across the sand to see the caverns and waterfalls. (Be careful and always check tide times! )

Rosemary, European dwarf fan palm, Buckthorn (Rhamnus lycioides) and Phoenician junipers can be found as well as Stone pine and some Aleppo pines. At the cliff edge plants have formed dense cushions to cope with the Atlantic wind and salt spray. Seablite (Suaeda sp) and perennial glasswort (Arthrocnemum perenne) are plants that have adapted to survive these harsh conditions.

Seagrass beds are important nursery areas for juvenile fish and the plants help to stabilize the sediment. The offshore Kelp forests harbor many species of flora and fauna that find shelter, food and surfaces for attachment on the kelp and the surrounding rocky sea bed.

Many small birds live in the pine trees including Goldfinch, Chaffinch, Woodlark, Dartford Sardinian, Orphean Warblers, Hoopoe and Serin. Spoonbills, Night heron and Osprey may be seen at the marsh areas. Jackdaws and common starlings form colonies in the walls of the ancient watch tower and in cracks and ledges in the cliff.

This is one of the few remaining habitats for the Chameleon.

The Monarch butterfly (Danaus plexippus) is making a home for itself here. It is a large colourful butterfly that is a well documented migratory species through America. (They have also been recorded in Los Alcornocales and Marbella areas.)

The Phoenicians caught their fish, salted the catch and exported them from this coastline. There are two watch towers, Torre del Tajo which looks out over the highest cliff and the second is close to Caños de Meca. These were built in the 17th and 16th century respectively.

At the Parque Natural De la Breña y Marismas del Barbate information center you will find an exhibition with a large selection of articles relating to the natural environment: maps, books, souvenirs, etc.

In addition to this, the information centre organises all kinds of activities involving ecotourism: hiking, horse riding, guided tours to the manufacturers of preserved fish, birdwatching routes, yoga sessions and lots of other activities of interest.