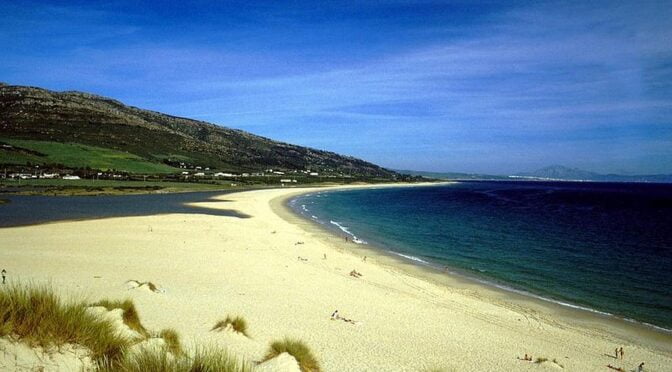 El Estrecho (The Strait of Gibraltar) natural park covers the southern most tip of Spain, containing within it environs a richness of history, vegetation and especially bird and marine life.

The coast of Morocco is just 14km away and this offers the shortest span for birds migrating from Europe to the African continent. Birds funnel into this area throughout the year with spring and autumn offering the most amazing sights. More than a million birds of over 200 species congregate in the area each year, this natural phenomenon is observed by many keen birdwatchers and researchers.

For birdwatching, general nature and also marine trips for whale and dolphin spotting, get in touch with Inglorious Bustards

El Estrecho is also where the Mediterranean sea connects with the Atlantic ocean, the latter has a lower salinity and the meeting point creates a unique zone of high diversity. Research on the marine environment has found more than 1900 species of plant and animal life with some being new discoveries.

Due to the exposed site, strong winds are a common occurrence, making this (especially Tarifa) a popular area with windsurfers.

Inland on high ground are natural Cork oak woods with Kermes oaks, Lentisc, Dwarf fan palms and Wild olive trees. There are also some planted areas of Pine and Eucalyptus. Stone pine woods form on the coastal cliff tops with an under story of Prickly and Phoenician juniper (Juniperus oxycedrus and J. phoenicea). Under the pines of Punta Palomas are low growing Annual Valerian (Centranthus calcitrapae) and Scarlet pimpernel (Anagallis arvensis).

In the shallower coastal strip of sand are coverings of Cymodoceion nodosae, whereas deeper water, from 22m, holds kelp beds (Laminaria ochroleuca) these plants that can grow to around 3m in length.
In clear waters there are many forms of sea weed with the most outstanding being Cystoseira.

White storks (Ciconia ciconia) give an amazing display when they collect in spiraling thermals by their thousands.

Along the shores can be seen Audouin’s, Mediterranean, Slender-billed, Lesser black-backed and Yellow-legged Gull. Grey, Ringed, Little ringed and Kentish Plover may be viewed on the beaches.

The marine zone of the park aims to protect various species, some of which are rare and endemic to the Mediterranean sea. Jellyfish including Merona ibera, Cervera atlantica and Scleranthelia microsclera and Sponges (Axinella estacioi) Elephant ear (Spongia agaricina).

Also molluscs and crustaceans such as the giant Mediterranean limpet (Patella ferruginea), which is one of the most threatened marine species in the Mediterranean Sea, Mediterranean fan mussel (Pinna nobilis) and Date mussel (Lithophaga lithophaga).

In rocky areas Mediterranean red coral (Corallium rubrum) grows, it is a protected species, orange coral (Astroides calycularis) can be found growing on rock walls and on the many shipwrecks in the area. Enclaves of Phymatolithon calcareum and Lithothamnion corallioides form in areas protected from strong currents at around 20m deep.

Turtles recorded in the area include the Leather back (Dermochelis coriacea), the critically endangered Hawksbill Turtle (Eretmochelys imbricata) and the vulnerable Loggerhead (Caretta caretta).

Resident species of Dolphins are Common (Delphinus delphis), Bottlenose (Tursiops truncatus) and Striped Dolphins (Stenella coeruleoalba), the latter is in danger of extinction.

Also resident are several groups of Long-finned pilot whales plus there are regular sightings of Fin Whale (Balaenoptera physalus). Other species such as Sperm Whale (Physeter macrocephalus) and Orca (Orcinus orca) regularly occur in the area. Minke (Balaenoptera acuturostrata) and Humpback whales (Megaptera novaeangliae) are more rare visitors but have been seen in the past.

Both Algecirus and Tarifa have municipal tourist offices.

An old military residential complex has been converted into what is now the most important visitor centres on the Cadiz coast. The centre offers a fascinating insight into the diversity and landscapes of the Campo de Gibraltar area: seabeds teeming with life, beaches and cliffs in constant transformation.

Huerta Grande also offers a wide range of activities including observation points with spectacular views of the Strait and of migrating birds, and conveniently located trails along which visitors can enjoy all the scenic and botanical richness of the area.

2 thoughts on “El Estrecho (The Strait of Gibraltar)”