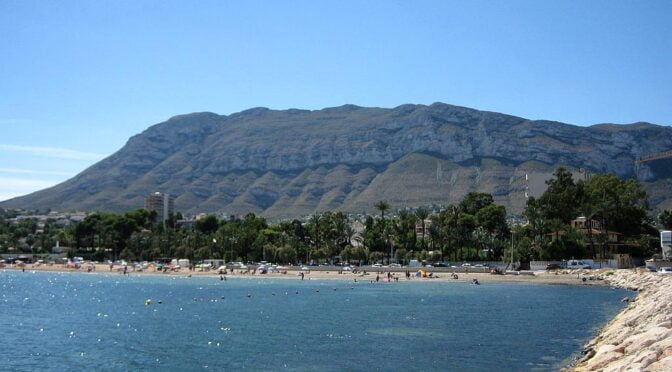 The Macizo del Montgó Natural Park (in Valencian Parc Natural del Massís del Montgó ) is located in the northeast of the province of Alicante between the towns of Denia and Jávea. This mountainous area rises steeply from the coast and dominates the skyline for miles around and is famous for its cliffs, caves and natural harbours.

The Cueva del Agua is located on the northern slope of Montgó at 350 m and was used by the Romans to supply water to a military checkpoint. Later It was also used by the Moors who developed it further by building a dam and irrigation channels to the surrounding field.

Due to forest fires over the years the pine and oak woodlands are now quite rare so “maquis” scrubland occupies most of the surface area with the most frequent species being Pistacia (Pistacia lentiscus), juniper (Juniperus oxycedrus), white and broom heather (Erica arborea and E. scoparia), Cistus such as (Cistus monspeliensis, C. salviifolius, C. albidus), and gorse (Calicotome spinosa).

In the higher more humid areas there are a number of endemic plants such as Hippocrepis Valentina and the Valencian rock violet, as well as the Mediterranean fan palm (Chaemorops humilis), the only palm species to grow wild in Europe. In addition, the Carduncellus Dianius or ‘Hierba Santa’ as it is known in Spanish, is unique and only found here and on the island of Ibiza.

Due to shortages of permanent fresh water, amphibians are rare although the Iberian spiny toad and the natterjack toad can still be found in the area. Reptiles, however, are more frequent with ocellated lizard, horseshoe whip snake and Bedriaga’s skink being quite common.

There are several walking routes in the area ranging from medium to quite hard (Routes 8, 9) and all are well signposted and colourcoded. Ask in the information centre or see here on the official website for more details: https://parquesnaturales.gva.es/es/web/pn-el-montgo/rutas-del-parque-natural

The Interpretation Center for the Macizo de Montgó Natural Park is located in the town of Dénia inside the municipal gardens of “Bosc de Diana” with information on the Montgó ecosystems, the Natural Reserve of the seabed of Cabo de San Antonio, walking routes and general information for the area as a whole.

The official website for the Macizo de Montgó Natural Park is here: https://parquesnaturales.gva.es/es/web/pn-el-montgo/centro-de-interpretacion