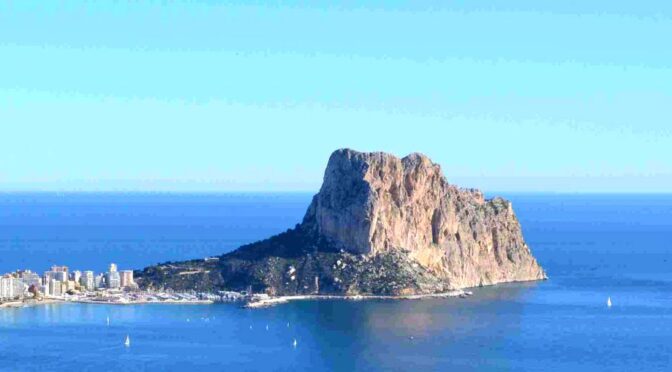 The smallest protected area in Spain, the Peñón de Ifac Natural Park (Penyal d’Ifac) is a massive limestone outcrop emerging from the sea to a height of 332 metres next to the town of Calpe.

There is a hiking route that leads to the top starting from the information centre with stunning views of the Mediterranean coastline and on clear days it is also possible to see the islands of Formentera, Ibiza and the Cape of Santa Pola.

The rock’s sheer cliffs and rocky escarpments, exposed to the sea winds on three sides, have created a variety of microhabitats that have fostered a diversity of specialised plant species. At the lowest levels, relatively deep soils with higher moisture content in areas protected from the sea have allowed the development of a typical Mediterranean scrub vegetation community including dwarf palms, juniper, lavender and pine.

Imported Phoenix dactylifera palms have now naturalised in the area.

The Ifac silene, (Silene hifacensis) is an endangered species first discovered on the rock and which has now, sadly, has gone from the area.

The rock face provides nesting sites for birds of prey including peregrine falcon, Eleonor’s falcon and seabirds such as gulls and cormorants.

Walking to the top of the Peñón de Ifac Natural Park

From the beginning of 2020, a maximum capacity of 300 people a day are allowed to the top of the Peñón de Ifac Natural Park. The path starts at the Information and Visitor Center and there is a counting system in place as you start the walk.

The information centre for the Peñón de Ifac Natural Park is easy to find and is well signposted.

Head for here if you plan on walking to the top. The centre has plenty of information about this and other protected areas along with the fauna, flora and history of the region.

Well worth a visit, the Archaeological Museum occupies the site of “El Portalet” which was once the only access door to the walled enclosure of Calpe up to the 14th century. It was demolished in 1923 and in 1926 the current building which now houses the museum served as the Town Hall until 1974.

The official website for the Peñón de Ifac Natural Park is here: https://parquesnaturales.gva.es/es/web/pn-penyal-d-ifac