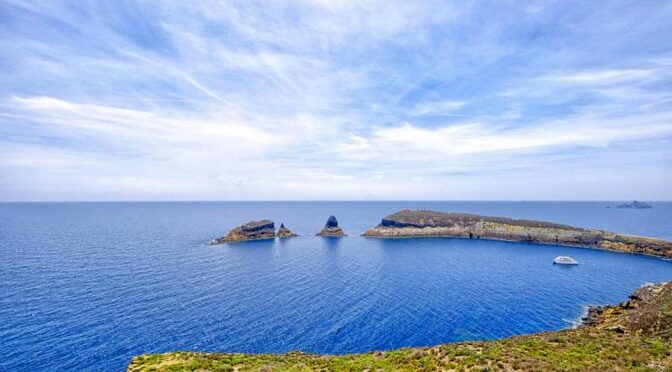 The Islas Columbretes Natural and Marine Reserve is located about 30 miles from the coast of Castellón de la Plana and is formed by the four groups of volcanic origin islets of l’Illa Grossa, la Ferrera, la Foradada and Carallot. There are no buildings on any of the islands except for Illa Grossa where there is a 19th-century lighthouse, a jetty and the staff quarters used by the biologists working in the marine reserve.

The islands are a highly protected area and so it is not possible to disembark without the express permission of the Marine reserve staff (visit the information centre for the Islas Columbretes Natural and Marine Reserve located in the Castellón de la Plana Planetarium for more information).

However, if you have your own boat, navigation in the area and access by sea are allowed and you do not require authorization, although remember that anchors are prohibited. Both the islands of L’Illa Grossa, as well as La Ferrera and La Foradada have mooring trains where you can moor without damaging the seabed in any way.

Active tourism companies also provide boat trips to the Columbretes Islands from different ports on the Valencian coast such as Castellón, Oropesa or Peñíscola and diving activities are also offered with some of these excursions .

These islands were known by Greeks and Romans from ancient times. Writers such as Strabo or Pliny the Elder cited the astonishing number of snakes inhabiting them. The names Ophiusa and Colubraria mean “serpent” in Greek and Latin and the islands owe their present name to “Coluber“, the Latin word for “snake”.

In the mid-19th century, a few people settled on Illa Grossa and the small community looked after maintenance of the lighthouse whilst helping to deter smugglers who used the islets as a refuge.

Farm animals including pigs were introduced that soon over ran the island. This combined with aggressive practices of slash and burn farming techniques to create arable land and to deprive the endemic Lataste vipers of a home caused the huge population of snakes to become extinct by the end of the 19th century.

Once declared a protected area the now feral pigs were removed but the snakes have never been re introduced.

Bird species such as the Audouin’s gull, Eleonora’s falcon and Scopoli’s shearwater are here in good numbers and the islands act as a key point during the spring and autumn migrations for birds that cross the Mediterranean between Europe and Africa.

The existence of an endemic subspecies of the Iberian lizard known as the Columbretes lizard or sargantana (Podarcis hispanica atrata).

In the waters laminaria algae can be found (very rare in the Mediterranean) as well as a large number of bream and many marine species that can be found in the clear waters such as groupers, snakehead, gilthead breams, moray eels, red mullet, lobsters, croakers, mantas and red coral,. The islands also constitute an important space reserved for lobster rearing and reproduction. as since since the creation of the reserve, significant increases in the number of lobsters have been observed, which has led to the possibility that the reserve acts as a focal point for repopulation of the species.

Much of the island’s vegetation was destroyed by ancient settlers to make firewood and extinguish the snakes. In addition, domestic animals such as rabbits, goats, and pigs were also introduced, which further contributed to eliminating the island’s sparse vegetation.

Only in La Ferrera are the last remains of the original vegetation (which formerly also covered the entire l’illa Grossa), such as European fan palm (Chamaerops humilis), mastic tree (Pistacia lentiscus), and common smilax (Smilax aspera).

L’Illa Grossa is mostly covered by shrubby sea-blite (suaeda vera) which is the predominant plant of the archipelago. In the areas closest to the sea there is also sea ​​fennel (Crithmum maritimum) and sea ​​carrot (Daucus gingidium)

The information centre for the Islas Columbretes Natural and Marine Reserve is located in the Castellón Planetarium, at Paseo Marítimo, 1 (12100 – Grau de Castelló). This is the place to head for to find out about visiting the island of Illa Grossa which is the only one open to the general public.

There is an excellent permanent exhibition covering the marine environment and the fauna and flora found in the area along with human activities such as fishing.

There is also a visitor center located on Illa Grossa with organised guided visits for small groups of people. The tour lasts between one and two hours and starts from the port of l’Illa Grossa and goes up to to the lighthouse, passing through the Visitors Center, where there is an exhibition of human history in the area and fishing.

One thought on “Islas Columbretes Natural and Marine Reserve”