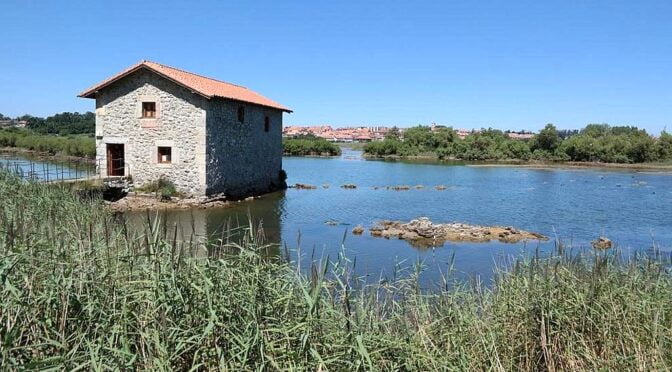 The Santoña Victoria y Joyel Natural Park is an estuary in Cantabria, protected as a natural park. It is one of the wetlands of most ecological value in the north of Spain. It is used as a winter refuge and migratory passage by many species of birds.

The marshes are formed by the Asón River and the park occupies over 6,500 hectares distributed among the municipalities of Argoños, Bárcena de Cicero, Colindres, Escalante, Laredo, Limpias, Noja, Santoña and Voto.

In 1987 the Spanish Society of Ornithology (now SEO / BirdLife) and ARCA (the Association for the Defense of Natural Resources of Cantabria) presented a complaint to the Commission of the European Union citing the terrible situation and the danger suffered by the Santoña marshes such as desiccation of areas of the marsh, construction of the Santoña-Argoños section of the Ca-141 road, ilegal rubbish dumping and residual contaminated water from towns and villages in the area. All this of course a huge risk to both the annual stay of thousands of migratory birds and residential wildlife.

Spain declared the Marismas de Santoña, Victoria y Joyel as a Natural Park in 1992. However, in 1993, the European Court condemned Spain for breach of its obligations to protect wildlife habitats under the EEC Treaty. This was the first ever environmental condemnation of the European court against Spain.

Spains basic defence was (and I quote) ” The Spanish Government takes the view that the ecological requirements laid down in that provision must be subordinate to other interests, such as social and economic interests, or must at the very least be balanced against them. ” The court rejected this argument completely.

Declares that, by not classifying the Santoña marshes as a special protection area and by not taking appropriate steps to avoid pollution or deterioration of habitats in that area, contrary to the provisions of Article 4 of Council Directive 79/409/EEC of 2 April 1979 on the conservation of wild birds, the Kingdom of Spain has failed to fulfil its obligations under the EEC Treaty;

Orders the Kingdom of Spain to pay the costs.

I have looked but can’t find how much Spain had to pay or evn if they did? Anyone?

You can read the entire very interesting legal document here. (actually it is very readable and not too full of confusing legal quotes.)
https://eur-lex.europa.eu/legal-content/EN/ALL/?uri=CELEX%3A61990CJ0355

The birdlife in the area is undoubtedly the park’s greatest wealth. More than 130 different species can be observed and this is an important point for migrating or wintering grounds for many species of waterfowl. Waders such as Dunlin, Whimbrel, Grey plover, Bar-tailed godwit and gulls. Also European wigeon, Curlew, Common egrets, oystercatcher, sandpiper, Godwit, Redshank, Black – headed gulls and Red necked grebe. .

It is also an important migratory resting place for the common spoonbill (Platalea leucorodia) which migrates from its breeding colonies in Holland flying over the coasts of France in order to reach the Santoña Marshes where they rest for a few days before continuing their journey to their wintering grounds in Africa. SEO/Birdlife estimates that a third of the European population of this species passes through Santoña every year

Two other species that are very rare wintering in the Iberian Peninsula, and that are frequent visitors to the Santoña marshes, are the Eider duck (Somateria mollissima), a large sea duck, and the Snow bunting (Plectrophenax nivalis) that inhabits the mountains of northern Europe.

The most abundant mammals are found in the woodlands of holm oaks and meadows. More than thirty species have been detected such as wildcat, boar, roe deer, red deer, otter, fox, badger, weasel, rabbit etc

The Visitor Center of the Santoña, Victoria and Joyel Marshes Natural Park, is located on the ground floor of the “Mirador de las Marismas” a building located in the port of Santoña . The unique glass façade allows you to observe, from the inside, a wide panoramic view of the marsh landscape.

Inside there is also and excellent exhibition showing history, culture, wildlife etc of the area.

The Molino de las Aves de Noja is located in the old tidal mill of the Marisma Victoria inside the Natural Park of the Marismas de Santoña, Victoria and Joyel. Apart from its exceptional location for birdwatching on the marismas there are also cameras located in nest boxes and a feeder in order to observe the daily behavior birds and children are actively encouraged to get involved in observing wildlife.

There are also self-guided ornithological itineraries taking you through the four natural environments of Noja : the dunes, the marsh, the mountain and the countryside.

Look out for signs for these top places for birdwatching.

The official website for the Marismas de Santoña, Victoria y Joyel Natural Park (In Spanish but has a google translate plugin at the top right of the homepage.)
https://www.turismodecantabria.com/disfrutala/parques-naturales/1-parque-natural-de-las-marismas-de-santona-victoria-y-joyel