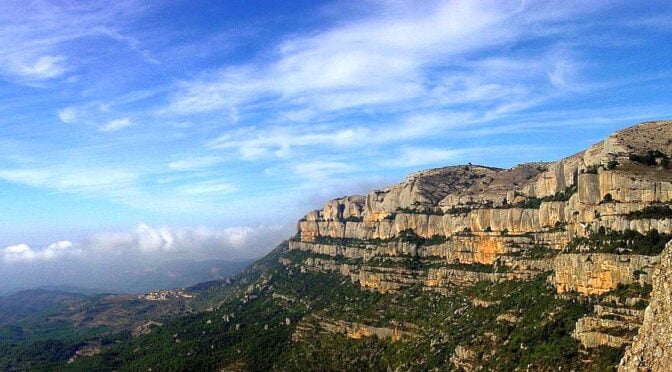 The most famous image of the park is the spectacular rocky walls of the Mayor cliff whilst the main peaks of the Serra de Montsant Natural Park are Roca Corbatera (1,163 m), Piló dels Senyalets (1,109 m) and la Cogulla (1,063 m).

This mountain region is also a famous red wine-producing zone and some of the best vineyards are located near the Cartoixa d’Escaladei, a Carthusian Order monastery.

As in most mountainous areas of Catalonia climbing is very popular here. So much so that new regulations were recently brought in controlling the numbers of climbers and climbing and routes (Vias ferratas) in the area. If you are climbing in the area then check in with one of the information centres first to find out about any new by laws and restrictions.

The park has a wealth of fauna, with endemic and very rare species in Catalonia. Mammals such as greater horseshoe bat, wild cat and Spanish ibex. Birds of prey such as Bonelli’s eagle, golden eagle, peregrine falcon and kestrel as well as many other birds, reptiles, amphibians, invertebrates and fish.

With regard to the vegetation, holm oak and shrubs dominate the majority of the landscape and there are also many Aleppo and Scots pine forests, as well as oak forests in certain areas.

In the area there are four trees declared monumental and are well worth seeking out. The Encina del Mas de la Barba, the Alcornoque del Mas de Les Moreres, the Tejo de la Cueva and the Sabuco de Fontalba. (Only the latter two are within the boundaries of the Montsant Natural Park.

The Cave Yew is approximately 1200 years old. It is the yew with the largest crown measured in Catalonia. This female specimen is located at the top of the barranco de la Taverna in front of a cave known as the Cueva del Tejo in the municipality of Margalef.

Normally shrubs, the Fontalba elderberry stands out for its trunk and crown dimensions. It is located in the municipality of Ulldemolins, where the Tagus stream joins the ravine of Fontalba. A short distance away is the Olletes sink hole, which is why it is also known as Les Olletes elderberry.

There are numerous routes in the Serra de Montsant Natural Park. Ask in the tourist office for maps detailing the eight simple flora routes, eleven municipal itineraries that take you through villages and five cultural routes that include the traditional shepherd routes (Caminos del Priorat), the via ferrata of Montsant and a cycling route. In addition, the GR 65-5, GR 171 and GR 174 trails cross the natural park.

The main information centre of the Serra del Montsant Natural Park is in Carrer Major in the town of La Morera de Montsant. There are also information points in Cornudella de Montsant and La Vilella Baixa, and a tourist office in Falset.