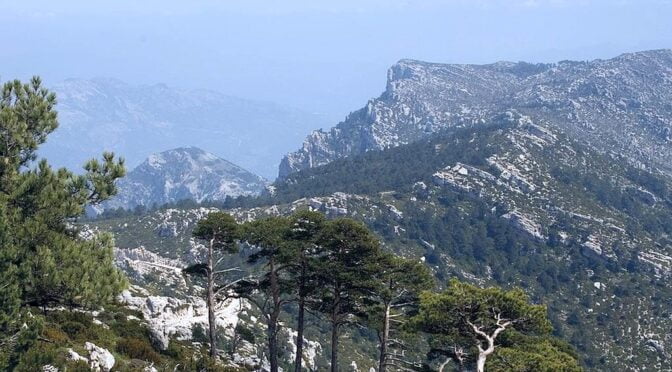 The Els Ports Natural Park mountain range (Parque natural de Los Puertos) consists of calcareous rock dating back to the Mesozoic era and is characterized by its sheer outlines. It holds many peaks over 1000m, the highest of which is Mont Caro at 1447 metres. The rivers cut deep gorges creating an area of sharp contrasts.

Connecting the Catalan Mediterranean system and the Iberian System this area holds a unique situation which allows for a diverse range of habitats and flora. The southeastern face, influenced by the Mediterranean climate, is temperate and has typical vegetation. The interior face has more continental climatic conditions and European flora. As the altitude increases, the result is a higher level of precipitation and a drop in temperature with primarily alpine vegetation.

Within the bounds of the park three regions of Spain meet at “el Tozal de los Tres Reyes”, a peak of 1356m, connecting Catalonia, Aragon and the Valencian Community.

The area has remains and cave paintings to illustrate prehistoric presence.

The Tierras del Ebro Biosphere Reserve was declared by UNESCO in 2013 and is an important protected natural environment containing many ecosystems. It covers the Mediterranean coast up to the mountains and includes also the Delta de l’Ebre and Ports natural parks.

Find a hotel close to the Els Ports Natural Park

A rich variety of flora has established in this area due to its geographical position. There are more than 1000 species recorded from typical Mediterranean to Alpine and European plant groups.

Tree species are predominantly evergreen oaks (Quercus ilex and Q. ilex rotundifolia) with Black pine (Pinus nigra subsp. salzmannii), Scots pine (Pinus sylvestris) and Yew (Buxus sempervirens). Montane holm oak grows on the higher slopes (Quercetum mediterraneo montanum). The populations of beech trees (Fagus sylvatica) are some of the most southerly such woods on the Iberian Peninsula, they form a reserve within the park “Les Fagedes”.

There is a type of willow tree that is endemic to this area of Tarragona and Castellón, the Salix tarraconensis, known locally as “Salze de cingle”.

Damp areas may hold the yellow Primrose (Primulia acaulis) or Green-flowered wintergreen (Pyrola chlorantha) in shady areas. The rare carnivorous plant Pinguicola dertosensis is numerous in patches on the steep sides of the rivers Matarraña and Ulldemó, but very few other places in Spain.

Other unusual plants are Antirrhinum pertegasii which is a petit rock dwelling Snapdragon on the red list of endangered plants. The Thrift (Armeria fontqueri) is endemic to this area and very few plants exist. Yellow flowering Brassica repanda subsp dertosensis is endemic to Tarragona. Erodium celtibericum, a dainty bicoloured flower and Knautia rupicola, a rock hugging pink flower are both endemic to south eastern Iberia.

The Spanish ibex (Capra hispanica pyrenaica) is the most well represented mammal in the park. Wild cat (Felis sylvestris) and Otter (Lutra lutra) are protected by law. Wild boar (Sus scrofa), Roe deer (Capreolus capreolus), Fox (Vulpes vulpes), Red squirrel (Sciurus vulgaris) and western European hedgehog (Erinaceus europaeus) are other mammals which live here but are often difficult to observe. The Mouflon (Ovis musimon) is a species that was introduced to the area in 1971.

Raptors that either live in or arrive to breed in the park are Griffon and Egyptian Vulture, Golden, Bonelli’s, Short-toed and Booted Eagle, Hobby, Goshawk, Peregrine Falcon with Tawny, Eagle and Scops Owls.

Dartford, Sardinian, Melodious, Orphean, Spectacled, Subalpine, Bonelli’s Warblers, European nuthatch, Wryneck, Golden oriole, Nightingale and Dipper are found in areas of scrub or woodland with the last three near water courses. Red-necked nightjar and Common nightjar are more often heard in the evenings rather than seen.

An insect that is on the red list of endangered species that lives in this area is the stunning Spanish moon moth (Graellsia isabellae) large, green and brown patterned with streamer like tails.

There are guided tours into two of these: Cueva “Meravelles”, 510m in length and “Cueva del Dos” 253m long. Both are renowned for their fabulous stalactite and stalagmite structures. The others are not open to the public.

In the southern area by the reservoir d’Ulldecona is a cave which contains prehistoric paintings “la Cova del Polvorí”, at “Barranco del Rosegadors”. Within are painted around 50 human figures and more than 30 animals including Red deer, Wild boar, Goats, Wolves and Birds. Most of the figures are hunting with bows although one dancer wears a long skirt.

in the town of Roquetes, on the Avenida de la Val de Zafán

This is the main information centre for the Els Ports natural Park and has information for other protected areas in Catalonia.

Els Ports Ecomuseum in Horta de Sant Joan is an interesting information centre and museum covering human impact on the environment and general information about the area, its geography, fauna and flora.

The botanic garden near the village of Ràfels used to be lovely but I have no information as to its state now. The last time I visited was 2013 and its was pretty run down then.