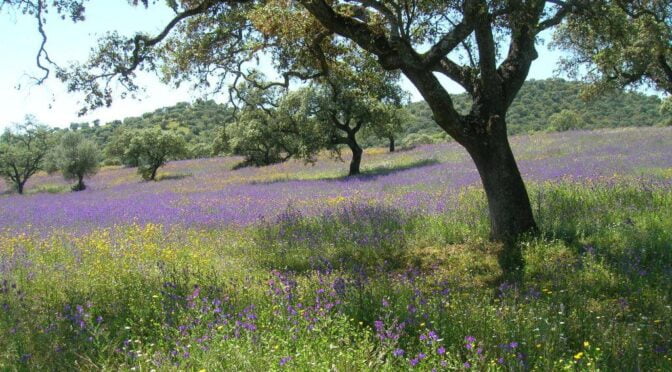 The natural park of Sierra de Cardeña y Montoro is a combination of gentle hills with outcrops of batholithic boulders, forest and meadows. The highest point being 828m at La Colmena.

It is located on the north eastern border of Cordoba and is separated from the natural park of Andújar in Jaen by the deeply ravined river Yeguas. There are cultivated fields along with Cork and Holm oak forests plus dense natural Mediterranean scrub.

This Natural park is part of the Sierra Morena and shares some endangered species in common with other natural parks in this mountain range. The Sierra de Cardeña y Montoro has among its inhabitants the protected Lynx and Wolf.

On a humid plateau near Cardeña there is a woodland of Pyrenean oak (Quercus pyrenaica) with shrubs of rockrose and lavenders. It is the only woods of this type in Cordoba province. The most dominant oak trees are Holm (Quercus ilex) and Cork (Q. suber) with small areas of Gall oaks (Q. faginea).

Along the river you will find Kingfisher, Dipper, Nightingale, Warblers, Wrens, Stripe-necked terrapins and Barbel.

There is a hide for bird watching on the reservoir named Embalse de Tejoneras. The birds you may see include Herons, Egrets and Little grebes. Many aquatic birds rest here on this lake on their migratory routes.

Tours in the province of Granada from Viator

Tin, copper and lead used to be mined in the area of Venta del Charco, where there are remains from the Iberian and Roman eras. Roman coins and silver Iberian vessels have been discovered at Azuel.

Remains of Megalithic graves from the Metal Age (3rd century B.C.) have been discovered at Torrubia.

Centro de Visitantes Venta Nueva, just outside Cardeña at Km 79 on the A92.

This visitor centre in the Sierra de Cardeña y Montoro has an interesting exhition displaying the typical Mediterranean landscape of this fertile highland zone, with its extensive dehesa pastureland, its Mediterranean scrub and its pine groves.

Visitors can follow the Cardeña-El Cerezo trail, which enters the dehesa and winds past a series of unusual granite blocks known as bolos.

For other sites and places to see try to visit the tourist office in the town ofCardeña. (Number 3, Miguel Gallo street)