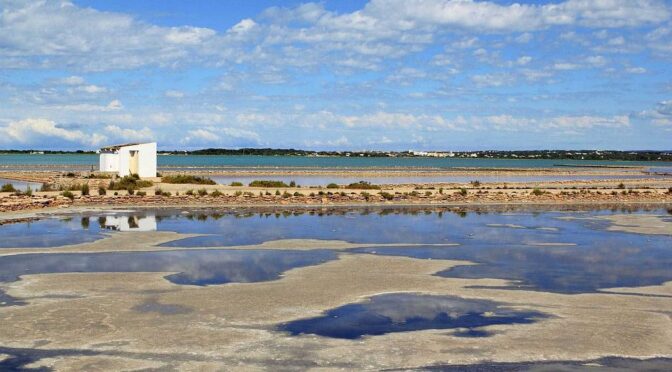 Located between islands of Eivissa and Formentera, the Ses Salines d’Eivissa i Formentera Natural Park covers the channel that separates the two islands and also part of the land masses and old salt flats. This Natural Park is a prime example of the Mediterranean’s rich biodiversity. It is an important rest area for countless birds along their migratory paths and a nesting ground. The area includes a diverse range of land and marine habitats of great ecological, historical and cultural value.

The territory comprises areas of the old salt flats of Ibiza, in the municipality of Sant Josep de sa Talaia and the salt flats of Formentera. Within the fauna the birdlife stands out, especially the flamingos , which are resident all year.

On land, the natural park boasts a magnificent representation of most of the existing plant formations in the Balearic Islands totalling almost 200 different species. These include Mediterranean pine groves, coastal savin groves, glasswort beds and the halophilic plants that surround the ponds, the dune systems and the coastal plants found along the cliffs.

The sea accounts for approximately 85% of the park’s area and is characterised by the ecological importance of its underwater Posidonia oceanica beds. This marine plant ensures the continued survival of the fish populations and other sea life. Moreover, it oxygenates the waters, keeping them clean and clear, while sheltering the beaches from the erosive effects of the waves and maintaining the natural dynamics of the dune systems.

Some 210 bird species have been catalogued in the natural park. Particularly worthy of note are the aquatic bird populations, including the flamingo (Phoenicopterus roseus), the black-winged stilt (Himantopus himantopus), the shelduck (Tadorna tadorna), the Kentish plover (Charadrius alexandrinus), and seafaring birds such as the Audouin’s gull (Larus audouinii) and the Balearic shearwater (Puffinus mauretanicus). The lagoon, Estany Pudent de Formentera, boasts one of the largest communities of the black-necked grebe (Podiceps nigricollis) in Europe.

Other animal species worthy of note in the park’s land areas include the Eivissa wall lizard (Podarcis pityusensis), which is endemic to these islands and appears on the other islets in different subspecies; the large garden dormouse (Elyomis quercinus ophiusae) on Formentera and many different endemic beetle and snail species.

Ses Salines (the salt flats) are characterised by their pink and violet colouration, especially in the summer. For Formentera’s inhabitants they are a major landmark and very important in the recent history of the island because of the salt industry. They may have been in operation since ancient times, but it is not until the 13th century that the first written references are to be found. In 1873 they were first acquired by the Majorcan Antoni Marroig and later by Salinera Española SA, a company that operated them until 1984. Ses Salines is a complex system that made use of S’Estany Pudent to create a seawater channel around it in order to achieve a higher salt concentration. This water was then pumped, using different mechanisms, to the system of ponds where the salt crystallised and was then extracted. They were declared of historical cultural interest in 2004, being the island’s only industry before the advent of tourism.

The Sant Francesc Interpretation Center is the ideal place to get to know the values of the Ses Salines d’Eivissa i Formentera Natural Park. Immersed within the Natural Park itself, it is part of the outbuildings of the church of Sant Francesc de s’Estany in the municipality of Sant Josep de sa Talaia.

The Interpretation Center offers visitors all the information they need about the Natural Park: environmental values, itineraries, permits, restrictions, agenda of activities, routes and guided tours of the center, educational possibilities…

Can Marroig Interpretation Center is the ideal place to learn about the Ses Salines d’Eivissa i Formentra Natural Park. There is an excellent exhibition showing the attractions of a natural park where the oldest Posidonia oceanica meadows, two salt mines and unique endemic species of these islands are found.