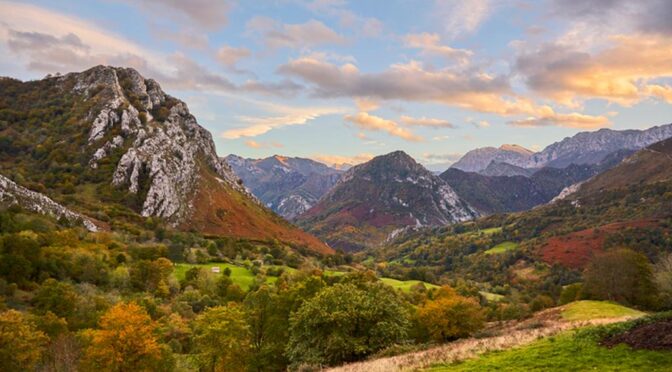 Ponga Natural Park is located in the central-eastern area of the Cantabrian Mountains entirerly within the environs of the town of its namesake, Ponga.

The most noteworthy of its mountain ranges comprises the sector of the Cantabrian mountains forming its southern boundary, constituting the watershed between the basins of the Rivers Sella and Duero and home to peaks such as El Abedular (1,813 m), Les Pandes (1,879 m) and Ten Crag (2,142 m), among others. Ponga Ridge constitutes its western boundary, with noteworthy peaks such as Maciéndome (1,899 m) Tiatordos (1,951 m) and Campigüeños (1.838 m).

The most important rivers in the area are the Sella, which runs through the eastern part of the territory to continue its course through Amieva and the Ponga, which runs from south to north. The local tributaries of the River Sella include the Roabin and the Rivers Mojizo, Porciles and Santa Bustia. The most important tributaries of the River Ponga are the Taranes and El Valle Moro. Most of these river valleys are narrow with sheer slopes, the most spectacular cases being those of Ponga Gorge and Beyos Gorge.

The economic importance of the forest in the recent history of Ponga and its inhabitants has always been present since ancient times. Forests such as Peloño and Semeldón were subjected to massive logging on several occasions for shipbuilding and to meet the demand for fuel in forges and ironworks, fed with charcoal. To a lesser extent, the wood burned in the limekilns to obtain lime also significantly influenced the decline of the forest masses in the region.

Thankfully logging is now highly controlled or banned and the natural park is a safe haven to the wildlife that inhabit it.

Find a hotel in the Ponga natural Park

More than a third of the Ponga Natural Park is made up of mature forests such as oak, birch, ash, maple and alder and the main forest in the area is called Bosque de Peloño. This is located in the southeast of the natural park and covers approximately 1,500 hectares.. Beech, however, is most predominant and together with other numerous forests scattered around the park they represent places of great importance since they are a vital habitat for emblematic and endangered species.

Along with these wooded formations, thickets and plantations alternate, reflecting the human management of the landscape. Among the bushes, heaths, gorse and broom stand out and among the plantations, chestnut trees (especially in the central area of ​​the park).

Among the flora of the Park it is worth mentioning the presence of the Asturian daffodil (Narcissus asturiensis) and the gentian (Gentiana lutea) both cataloged as species of special Interest in the Regional Catalog of Threatened Flora of Asturias.

The excellent state of conservation of the habitats in this natural park makes it possible to find some of the most emblematic species of the Cantabrian mountains. Among the mammals, the otter (Lutra lutra) and the desman (Galemys pyrenaicus) Also there is the occasional presence of the brown bear (Ursus arctos).

The Ponga Natural Park is also included in the Natural Network as a Special Protection Area for Birds (ZEPA). This is due to a rich and diverse bird fauna mainly composed of forest species such as the Cantabrian grouse (Tetrao urogallus cantabricus) and the middle spotted woodpecker (Dendrocopos medius) or birds of prey such as the golden eagle (Aquila chrysaetos), griffon vulture (Gyps fulvus ) and goshawk (Acipitter gentilis).

The Interpretation Center of the Ponga Natural Park, in the town of San Juan de Beleño, offers visitors an interesting tour and covers themes of human history in the area, towns, traditions and crafts as well as the expected exhibitions on the natural history, flora and fauna of Asturias.

If you are interested in hiking and walking in the area then this office has a good selection of local maps and guides.

One thought on “Ponga Natural Park”