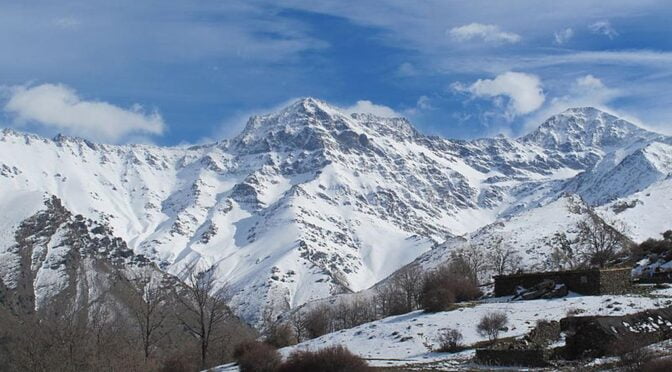 The parks lowest edge begins at 400m with the highest peaks situated to the western part of the sierras. They are Mulhacén 3,482m, Veleta 3,392m and Alcazaba 3,366m which are grouped together in a cluster. This mountain range is comparable with the Alps with more than 20 peaks over 3,000m, but in a southerly and warmer part of Europe. Mulhacén is the tallest summit in mainland Spain. (The highest overall peak belonginf to Spain being mount Teide in the Canary Islands.)

The Sierra Nevada and the Canary Islands have another similarity in that they carry the highest range of plant life in Spain. The Sierra Nevada holds a quarter of the plants listed in Spain, around 116 of which are threatened and 66 endemic, (solely from these mountains) having taken thousands of years to adapt in this difficult environment.

This is Europe’s most southerly glacial landscape where lichens are the most common vegetation, growing widely on the exposed and poor quality soils above 2,800m. The last of these glaciers melted at the end of the 20th century but there are around 50 glacial tarns, (lakes held in the depressions created by the glaciers) the highest one being the Laguna de Altera, at 3,146 m.

In the Sierra Nevada summits (above 2,000 meters) there are damp pastures which are covered in snow for a great part of the year. They represent one of the most fragile and exclusive ecosystems of the massif known in Spanish as “borreguiles“. They contain a great vegetal biodiversity and this is where most of the Nevada endemics can be found. The delicate balance for these plants is seriously threatened by the excessive grazing of livestock and these marshy grasslands and peat bogs will also alter with climate changes.

One of the more intriguing plants that grows on these humid grassland and watercourse edges above 2,000m is the carnivorous Pinguicula nevadensis. The lilac blue flowers in June or July are on stems that may only reach 10cm. This endemic “butterwort” has a sticky basal rosette of leaves onto which small insects get trapped. The leaves attract this extra food supply with their yellow colour and shiny substance. The victims get caught in the greasy coverage (mucilage) secreted by glands. Other glands are then stimulated to produce more digestive substances, suffocating and then breaking down the prey.

Some of the endemic plants of the sierra have reference to this in their names such as Verbascum nevadense, Saxifraga nevadensis, Arenaria nevadensis, Aquilegia vulgaris subsp. nevadensis or, they describe where they can be found, as in high glacial areas such as Linaria glacialis, Biscutella glacialis and Antirrhinum rupestre which grows in rock fissures.

Lower valleys have a deciduous mix of Gall oaks (Quercus faginea), Montpellier maple (Acer monspessulanum) and the native Maple (Acer granatense). The oak, chestnut and pine forests give way to the rolling hills of land cultivated with almond trees, citrus groves and vineyards

The river banks are lined with Poplar (Populus alba), Alder (Alnus glutinosa), Willow (Salix atrocinerea), Ash (Fraxinus angustifolia) and Elm (Ulmus minor). The Genil river valley is noteworthy for Mediterranean orchids and linarias (the source of which is in the high peaks).

The easiest of the mammals to spot are the numerous Spanish ibex.

Other mammals which inhabit the area but are nocturnal or secretive and therefore more difficult to see include Wild boar, Fox, Badger, Wild cat, Weasel, Beech marten and Genet with the Garden dormice and Wood mouse (Apodemus sylvaticus) at the smaller end of the scale.

This is the southern most habitat for the Snow vole (Microtus nivalis). This vegetarian rodent lives on the scree slopes above the tree line. It is active both day and night and still finds grasses to eat underneath the winter snow.

Birds of prey that can be seen soaring or hunting from the sky are Golden, Booted and Bonelli’s eagles, Peregrine falcon, Kestrel, Sparrowhawk, Goshawk and the largest, which often seen in large groups is the Griffon vulture.

The rivers contain trout and attract various amphibians and reptiles. The Betic midwife toad (Alytes dickhilleni) is on the Red List, marked as vulnerable. It is a species that is restricted to the mountains of southeastern Spain. Others include the Spanish painted frog (Discoglossus jeanneae), Fire salamander (Salamandra salamandra), Ocellated lizard (Timon lepidus nevadensis), Spiny-footed lizard (Acanthodactylus erythrurus) and Bedriaga’s skink (Chalcides bedriagai).

Sierra Nevada park has a list of some 120 butterfly species recorded with some endemic to the area such as the Sierra Nevada blue (Polyommatus golgus) which flies above 2,400m altitude and the large and easily identified Apollo (Parnassius apollo nevadensis) which only flies in mountainous areas.

The resort of Prado Llano is at 2,100m on the slopes of Veleta. This is a base for winter skiing along with Sol y Nieve, a higher ski station. The track from here to the village of Capileira is the highest pass through the mountain and is closed to vehicles. This pass is popular with hikers but great care must be taken in crossing these mountains as with any summits of this altitude the weather can change quickly and ill equipped people can place themselves in great danger.

Capileira and Trevélez are two of the highest villages on the southern slopes of the Sierra Nevada. They are a part of the Alpujarras which is the name given to an area separated from the sea by a smaller mountain ridge, the Sierra de Contraviesa.

The nearby city of Granada is often the focus of a combined visit covering culture and nature. It holds the famous Palaces of the Alhambra within the Generalife gardens as well as a Cathedral and Monastery of La Cartuja.

El Jardín Botánico de la Cortijuela is a botanic garden which covers 12.4 hectares and is run by a Junta de Andalucía, and the University of Granada. It is in the area of Trevenque and aims to protect, conserve, propagate and investigate plants within the sierra concentrating on the endemics.

This circular itinerary around what is a truly outstanding location will enable the visitor to discover the richness of the local plant community. There are herbs, beautiful orchids, typical riverine woodland vegetation and even prickly plants like the hawthorn and aromatic species like sage, all surrounded by wild holm oak and pine woods.

In the western part of the park “El Dornajo” at Km 23 on the A395 road, with café, museum and library.

Almost central to the park is the Puerto de la Ragua information point on the A337 at Km 11.6 by a picnic area of the same name.

In the Alpujarras there is an information point in the village of Pampaneira. and, don’t fofget the Tourist offices in Granada and Almeria if you are in those areas