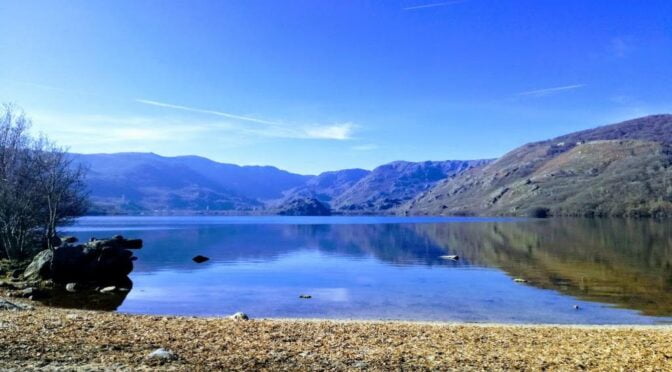 At almost 200 hectares and a depth of 50 odd metres the lake, that gives its name to the park, is the largest natural lake in the Iberian Peninsula of glacial origin.

The trout inhabiting both the lake and rivers in the area are highly appreciated in sport fishing and exquisite culinary tasting. In the lake they grow to a large size and the flesh usually has a salmon-pink hue. If you like trout ask for “trucha Sanabrasa” in a restaurant as it is a a staple in the zamorana kitchen.

Located in Sanabria, the northwest part of the province of Zamora close to the border with Portugal it covers the mountainous areas of the Sierra Segundera and Sierra de la Cabrer with heights ranging from 997 m at the lake banks to the 2,124 m of the peak of Peña Trevinca.

This area is one of the few areas in Western Europe having a sizeable population of Iberian wolf living in the close by Sierra de la Culebra mountain range.

The geographic location of the Lago de Sanabria Natural park on the edges of both Atlantic and Mediterranean climates and in both humid and temperate zones creates a diverse habitat for an enormous wealth of flora with more than 1500 recorded species.

Plentiful water is also another factor of diversity with the abundance of streams, springs, lagoons, bogs and flooded areas that allow the existence of a characteristic aquatic flora adapted to the clean waters found in this natural space. Among these humid environments peat bogs stand out for the quantity of compact masses of different species of Sphagnum moss and that can reach several meters in thickness. These peat bogs are also the prefferred habitat are the preferred habitat for Sundew – a small carnivorous plant.

The dominant forest is that of Quercus pyrenaica and in the colder, damp valleys and on the banks of the Tera river these oaks are replaced by alder (Glutinosa Alnus), birch (Betula pubescens), haze (Corylus avellana), rowan (Sorbus Sorbus) and holly (Ilex aquifolium.) Junipers and yews are also present and closer to towns and villages we find tended groves of wallnut and chestnut.

Around 40 species of mammals are present in the area and species such as the Iberian wolf, wild cat, pyrenean desman, otter , stone marten, stoat and badger stand out. Red deer, roe deer and wild boar are numerous.

From around 2012 the brown bear has been repopulating the area. It would seem that they are dispersed adults from the Western Cantabrian subpopulation that holds around 200 individuals. in 2019 and 2020, reports were made of sightings around the Sanabria lake and the Sotillo valley coupled with attacks on beehives in the area.

Raptors are present in good numbers. Golden eagle, Honey buzzard, Peregrine falcon, Kestrel and Eagle owl to name a few and around 125 species of bird species are recorded in the park.

Located near the town of Rabanillo at the intersection with the ZA-104 road The Park Interpretation Centre has a permanent exhibition that shows the natural, social and cultural aspects of the park using scale models, explanation panels and audiovisual presentations, etc.

The restored monastery of San Martín de Castañeda is a medieval building that housed the Cistercian monks and has been declared a Historic-Artistic Monument. There is an exhibition covering history, ethnography and a sample of recovered sacred art.