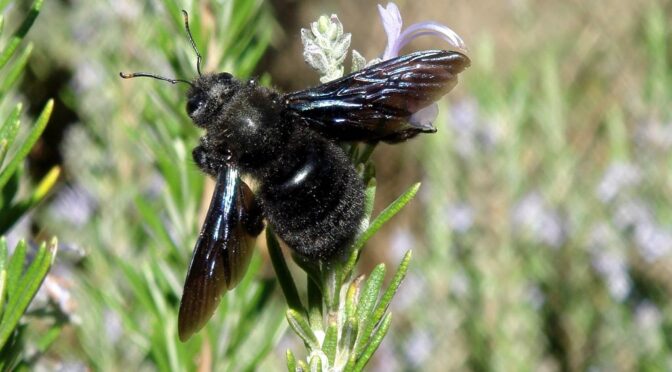 Although some bees and wasps can be a bit annoying whilst you are trying to eat out on your terrace during the summer, it is without doubt that they are an incredibly important part of the biodiversity of our world. Bees are found on every continent except for Antarctica, in every habitat on the planet that contains insect-pollinated flowering plants. There are over 16,000 known species of bees in seven recognized biological families. Some species (including honey bees, bumblebees, and stingless bees) live socially in colonies while some species including mason bees, carpenter bees, leafcutter bees, and sweat bees are solitary.

Some of the oldest examples of bees in art are rock paintings in Spain which have been dated to 8,000 BC. In the Cueva de Araña in Valencia the painting depicts a human figure near a cavity where there is a beehive. hanging on three lianas, he is picking up honeycombs.

The most commonly known wasps are the yellowjackets and hornets in the family Vespidae. These are referred to as “eusocial” and live together in a nest with an egg-laying queen and non-reproducing workers.

Thread-waisted Wasp – Sceliphron spirifex- Sceliphron spirifex are solitary wasps and are not aggressive, they do not sting unless mishandled. The sexes look very similar with the female being larger and with a visible sting.
Carpenter Bees – Xylocopa violacea- Abeja azul de la madera The later part of this name derives from the beautiful purple / blue sheen seen on the wings as they catch the sunlight. These black bees are common in central and southern Europe.
Mammoth Wasp – Megascolia or Regiscolia / Maculata flavifrons – Avispa parasita de cuatro puntas This is a very large solitary wasp, the female reaching up to 4.5cm whereas the male is a little smaller. This species appears in warm weather during late May, June, July and August.
Hornets – The Gentle Giants of the Wasp World They behave in a social manner, creating a nesting colony which thrives and dies in just one year life cycle.

At up to an inch and a half in length, this beautiful wasp (Great Potter Wasp – Delta unguiculatum – Avispa Alfarera) is the largest European species of the Eumeninae subfamily.