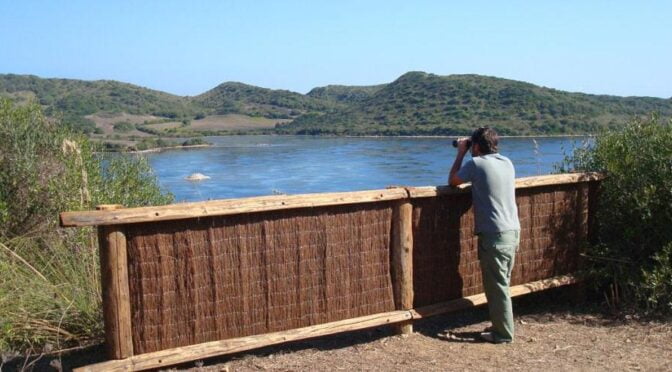 S’Albufera des Grau Natural Park is located in the northeastern part of the island of Menorca close to the town of Es Grau and the beach of the same name (Playa del Grau). Access is via the PMV-7102 road from Es Grau and the PM-715 main road from Cabo de Favàritx.

In 2003 the Park’s limits were expanded to cover a total surface area of over 5000 hectares which also offers protection to the five islets of Addaia, s’Estany, Bassa de Morella, es Prat and the Illa d’en Colom. The Park forms part of the Natura 2000 Network and the lagoon is the nucleus of the Biosphere Reserve.

This protected natural environment includes some very diverse habitats with varying degrees of human intervention such as wetlands, agricultural and livestock areas, forests, a coastline of cliffs and beaches, islets and a marine environment. The lagoon is separated from the Mediterranean sea by sand dunes and is fed by three streams.

Flora and fauna in the S’Albufera des Grau Natural Park

Except for the wetlands and the coastal strip, wild olive (Olea europaea var. sylvestris) is predominant and is accompanied by mastic tree (Pistacia lentiscus), privet (Phillyrea media) and tree spurge (Euphorbia dendroides). There are also a few small stands of holms oak.

The beaches hold well-developed dune vegetation, and the rocky coastline features the locally known socarrells, thorny pincushion-like shrubs that are shaped by the splashing sea and the wind.

In the summer months the three streams feeding the lagoon stop flowing and seawater enters. This results in different salt contents in the soil which has an influence on the some 200 odd plant species present.

The wetlands of s’Albufera des Grau, which are less influenced by salt water, are populated by various grasses such as rushes, reeds, grasses and cattails .

There are many bird species found in the area include mallard, coot, little grebe, bittern, stilt and reed warbler. Migratory birds such as cormorants, grey heron and teal pass through. Shoveler duck and pochards also winter in the area.

Among the reptiles and amphibians that live in the Park, mention must be made of the Balearic wall lizard (Podarcis lilfordi), which is endemic to both Majorca and Minorca and found exclusively on the islets, where it has diversified, gradually evolving into different subspecies. There are also other interesting species such as the Balearic green toad, the European tree frog, the land and sea tortoises, the Italian wall lizard, the false smooth snake and the ladder snake.

The wealth of the natural park is summarized in the Rodríguez Femenías Interpretation Center. Here you will find a permanent exhibition reflecting all the different areas of the park: wetlands, cultivated fields, forests, cliffs, beaches, rocky islands and the wildlife in the area.

From here you will be able to access the two bird observatories and also the three self-guided routes of La Gola, Santa Madrona and LLimpa. (You can also book the very popular guided tours which last for around two hours (maximum of 20 people).