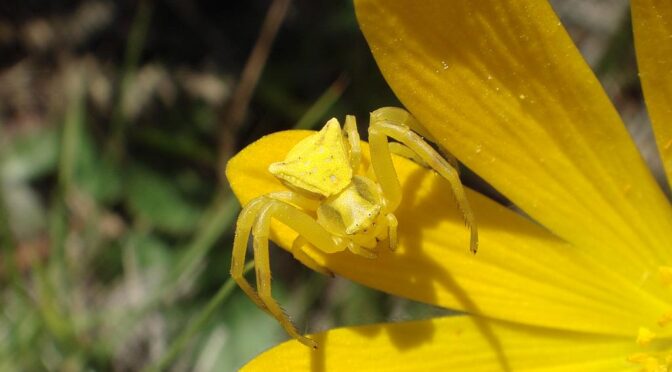 There are more than 1,700 species of spider in Spain but only three can sometimes be harmful to us. The black widow (Latrodectus tredecimguttatus) gives a medically-complex and painful bite though it is not fatal. They are commonest in Valencia and Andalucía, and they can be a problem in the greenhouse estates of Almeria.

Historically, the bite of the black widow, along with hysteria, was often responsible for the condition of tarantism, though at the time the totally innocent and much less-potent but fearsome-looking true European wolf spider (Lycosa taratula ) from Italy got the blame.

The spiders of the Iberian Peninsular take on many forms, the most fun looking ones are perhaps the jumping spiders which are very small and are quite agile as their name suggests. One of the brightest of this form is scarlet and black but only about 4mm in size. Another spider that is easy to observe and has bright colours are the Crab Spiders (Thomisidae species), which usually takes on the colour of flower petals and sit quietly, well camouflaged and wait for a bee etc to land.

One of the larger spiders indigenous to Spain is the Wolf Spider (Lycosa tarantula) which lives in burrows in the ground, hunting its prey by night. Another is the Andalusian Funnel Web Spider (Macrothele calpeiana) which receives European level protection. This one can give a painful but not serious nip if threatened.

This is an ongoing project and links will be green if they are live and lead to further information.

There are five types of Scorpion indigenous to the Iberia peninsular, the most common in the south being the Spanish Yellow Scorpion (Buthus occitanus). In 2004 two new Buthus species have been described from Iberia: Buthus ibericus and Buthus montanus. (These scorpions were previously classified as Buthus occitanus). The European Black Scorpion (Euscorpius flavicaudis) inhabits the more northerly parts of Spain preferring wetter areas, whereas the small rare, cave dwelling Belisarius xambeui can only be found in the Catalonian Pyrenees.

There are various forms of Centipedes and Millipedes, from the peculiar Long Legged Centipede (Scutigera Coleoptrata) to the much larger, poisonous, Megarian Banded Centipede (Scolopendra cingulata). Sometimes sizeable groups of millipedes will collect together under rocks.

Spiders, Scorpions and Centipedes in Spain

Struggling with identifying those Spiders, Scorpions and Centipedes in Spain? Why not check out the Iberia nature Forum!