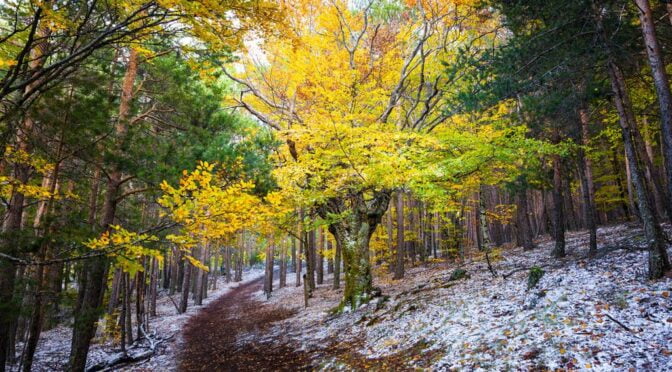 The Sierra Norte de Guadalajara Natural Park extends through the a vast area of the northern mountains in the province of Guadalajara. It encompasses the Ayllón and Pela mountain ranges as well as the pre-existing Hayedo de Tejera Negra Natural Park, the Pico del Lobo-Cebollera Massif nature reserve, the Pelagallinas River fluvial reserve and the National Hunting Reserve of Sonsaz.

Raptors are well represented in the area with populations of Bonelli’s eagle, golden eagle, kites and peregrine falcons along with the mountain birds such as bluethroat, alpine accentor and red-backed shrike

The Iberian wolf is once again present in the mountains of the Sierra Norte de Guadalajara natural park causing the usual conflicts between landowners, farmers and the environmental protection groups.

The presence of the American mink, an escaped/introduced invasive species is causing problems in the area and time will tell the outcome of this. Maybe the wolf and other carnivores will help to control the expanding populations?

Bats are numerous in the area with 11 species present

The Hayedo de Tejera Negra Natural Park is a beech forest located in Cantalojas in the northwestern corner of the province of Guadalajara and is the most southern forest of its kind in Europe .

The beech forest here has survived due to being mostly inaccessible and this halted the harvesting for firewood and charcoal as well as clearance in order to create pastures for livestock.

The area is very popular for the harvesting of edible wild mushrooms especially boletus species.

The website of Hiking Iberia has some fantastic walks in the area. On the map just click on the icon of the route for excellent descriptions and maps of the area. You can even each hike you can download the GPX file which can be used on your GPS device.

The Interpretation Center of the Sierra Norte de Guadalajara Natural Park is in Cardoso de la Sierra on the GU-187 road in the direction of Colmenar de la Sierra.

There is a video projection and information about the geology, history, fauna and flora of the area.

The Interpretation Center of the Sierra Norte de Guadalajara Natural Park, “Hayedo de Tejera Negra” is located 2 km from the town of Cantalojas)

Here you will find