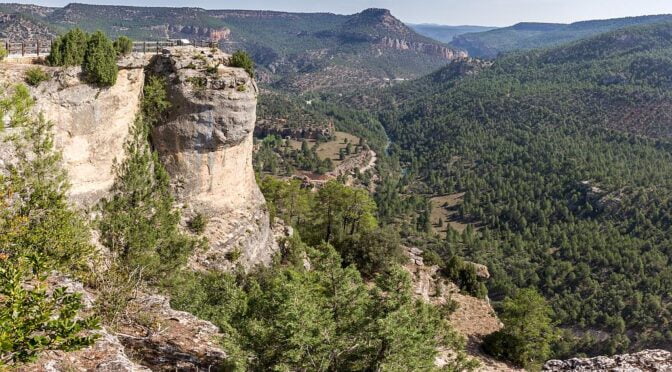 The Alto Tajo Natural Park located between the southeast of the Guadalajara province and the northeast of Cuenca is famous for its canyons and gorges formed by the river Tagus and its tributaries. (The most extensive river gorge system in the region and one of the most important in Spain, with a great geological, botanical and fauna diversity.

Pine forests and spectacular cliff formations make for a wonderful area to explore with over 40 villages and towns within the parks boundaries. There are several Special Protection Areas for Birds (ZEPA) and Special Conservation Zones (ZEC) established in accordance with the Natura 2000 Network.

Most of the species of birds of the Iberian Peninsula reside in or migrate through the Alto Tajo Natural Park which has led to the creation of a Special Protection Area for Birds (ZEPA).

The concentration of mammals, (predators and herbivores), reptiles, amphibians and fish are abundant throughout the park due to its massive size and wealth of habitats.

This protected natural space is in an excellent degree of conservation however:

“The park has been threatened by Kaolinite mining, with the government finding it hard to regulate as it contributes to 13.5% of all the jobs in the area and because Kaolinite is considered an important mineral in the national economy as it is a raw material in many industries. Currently two mines are operational in Poveda de la Sierra which affects an area of around 100 hectares. There is also an open mine in Peñalén, where mining has been put on hold. Mining in the area began in the 1960s with an English multinational company called ECC being the sole miner for 20 years before they pulled out of the country.
The present mining companies hold a mining right for 90 years and have been reluctant to stop mining without proper compensation.

The runoffs from the mines are polluting the Tagus river, besides affecting the fauna in the river

This is a large protected area and as such has quite a few information centres dedicated to the natural park of Tajo Alto.

Located in the northern sector of the Natural Park, 2 km from Corduente, at KM 85 of the CM-2015 road that connects this town with Zaorejas, about 10 km from the town of Molina de Aragón.

The Interpretation center in Orea is dedicated to the inhabitants of the Alto Tajo, it was built by reforming the building of the old “Orea Sequero“, a forest house located in the town that had an oven to dry pinecones and extract pine nuts that later were used in the forest nurseries for reforestation of the mountains. The museum is mainly oriented to the interpretation of the ethnographic heritage and traditional uses of the Tajo Alto but there is also general information available.

This interpretation center focuses on the details of the Tagus River from its source and the 1000 km journey to its estuary in Portugal studying the most relevant aspects of its passage through the Natural Park including the lagoon and river ecosystems, fauna and flora.

located in the town of Checa. Plaza Lorenzo Arrazola nº 1. (Next to the Town Hall).

This museum focuses on the traditional livestock farming that has been carried out in the Alto Tajo since ancient times. Also the timber extraction that has shaped the landscape that we see today.