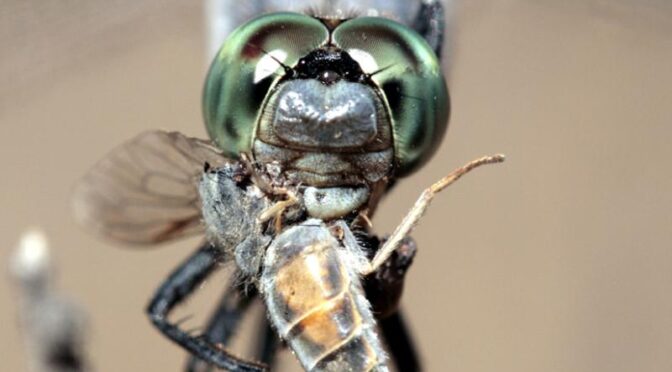 Dragonflies and damselflies in Spain are extremely beautiful insects which capture the very essence of summer as they perform their intricate aerobatics around the gleaming backdrop of rivers and pools on hot and sunny days.

As such they are highly visible and important indicators of the health of our wetlands being top insect predators both as airborne adults & aquatic larvae.

Dragonflies are entirely harmless and do not bite or sting, (though they may give a gentle nip if roughly handled!). They also make superb subjects for photography though getting close enough for a good shot can be difficult!

Over 70 species of Odonata (Dragonflies) have been recorded from the Iberian Peninsula and these can be divided into two sub-orders, the Zygoptera (damselflies), and the Anisoptera (dragonflies).

Dragonflies are generally larger insects and as mature adults when at rest hold their wings apart at approximately 90 degrees to their body.

Wetland habitats are very important for all odonata species with both dragonflies & damselflies spending the majority of their lives as larvae in a pond, river, lake or marsh. The hot & dry climate in many parts of Iberia frequently means that water is a scarce commodity so man made habitats such as reservoirs and water tanks for livestock & irrigation can be vital resources.

Dragonflies first come to water as mature adults, the males establishing a territory along a stretch of freshwater habitat which they will defend against intrusion from other males, while also mating with any females that enter their domain. You may come across a male and female embraced in a heart shape, this is known as the “wheel”, a position which the pair adopt during copulation.

After mating the female may lay her eggs in tandem with the male, the male grasping the female between the head and thorax with the tip of his abdomen. In dragonflies this tends to mean the pair fly low over the water and adopt a swinging motion so that the tip of the female’s abdomen dips into the water with the eggs washing off randomly.

In damselflies where ovipositing is carried out in tandem the male sometimes lowers the female down a plant stem so that she becomes totally immersed in the water before carefully depositing her eggs into the aquatic vegetation.

In some species of dragonfly where the female oviposits by dipping her abdomen into the water during flight the male hovers nearby guarding against any rival male attempting to mate with her and displacing his sperm (males can remove another dragonflies sperm before placing their own!). Another strategy employed by some dragonfly & damselfly species sees the female ovipositing alone by carefully placing her eggs in plant tissue with no male presence at all.

Once the egg hatches the larva may undergo as many as 15 moults over a period of 1 to 2 years or more before emerging as an adult. However a species such as the Red-veined Darter – Sympetrum fonscolombei can complete its larval stage in as little as three or four months, thus producing two generations in a year, and at the other extreme a Golden Ringed Dragonfly – Cordulegaster boltonii may take up to 5 years to complete it’s larval development.

The transformation from aquatic larva to airborne adult is one of the most amazing spectacles in the natural world. This often takes place during the early hours of the morning (eg hawkers), but some species will continue to emerge throughout the day (eg darters & most damselflies). In some species the larva select suitable plant stems to emerge on (frequently vertical), though others such as the Clubtails, (Gomphus species), may emerge horizontally on a rock or bolder.

Once the larva is happy with its chosen emergence support it will remain in the same position for some time before the top of its thorax splits open and the adult slowly hauls itself out of the exuvia (or cast skin), head first. While its abdomen is still tucked in the exuvia the fledgling adult will hang upside down allowing its new legs to harden for about half an hour. It then miraculously flicks itself upwards, extracting the remainder of its abdomen while simultaneously grasping at a support with its newly hardened legs, a breath taking manoeuvre which is all over in seconds. The insect then pumps up its wings and abdomen before allowing both to harden up. This whole process may take anything from 2 to 3 hours.

Emergence is a very vulnerable time for dragonflies as whilst unable to fly they provide an easy meal for birds, spiders, slugs and ants. Deteriorating weather such as rain showers or strong gusts of wind can ruin a dragonflies wings while they are relatively soft, leaving the insect flightless and doomed.

Newly emerged adults, known as tenerals, may fly many kilometres away from the wetland in order to feed and mature. It will take these tenerals several days to gain their full adult colours, and males will frequently resemble females in tone at this stage. Once fully mature the adults will search out suitable water bodies in order to breed. This may mean returning to the wetland where it developed as an aquatic larva, or it may involve a dispersal where the obvious advantages of a winged adult allow new sites to be colonized.

The Iberian dragonfly population is frequently reinforced by migrants from North Africa. A walk on a beach along the Mediterranean coast during March may often be rewarded by the sight of the Lesser Emperor – Anax parthenope or even the Vagrant Emperor – Anax ephippiger, coming ashore after a crossing from the African continent.

It is also interesting to note that over the last 3 decades or so species such as the Violet Dropwing – Trithemis annulata, the Banded Groundling – Brachythemis leucosticta and the Black Percher – Diplacodes lefebvrii have all colonized the Iberian Peninsula from North Africa, and more may follow in their footsteps as the effects of climate change take hold.

Below is an ongoing project about dragonflies and damselflies in Spain. Follow the links if the text is green for further information and images.

One thought on “Dragonflies and Damselflies in Spain”