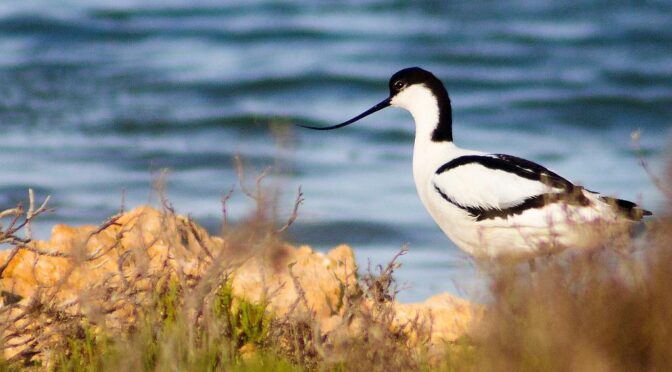 The Lagunas de la Mata y Torrevieja Natural Park is located in the Vega Baja del Segura region and together with El Hondo lagoon (close to the town of Elche) and and the Santa Pola salt flats, they form a triangle of wetlands with international importance to birdlife.

The two lagoons are separated by an anticline (a raised fold of the earth’s crust formed by tectonic effects) called the Chaparral and they are artificially connected to the sea by a channel known as the Acequión which was built for the exploitation of the Torrevieja salt flats.

Salt extraction has been in operation here since the 13th century and continues to present day so for this reason, much of the protected area is closed to the general public. (There are, however, good access points, footpaths and observatories for birdwatching)

Plants that live here are adapted to high concentrations of salt and they are usually succulents, such as salt grass. The scrubland and the Mediterranean forest is made up of arboreal and shrub species such as Aleppo pine, lentiscus, juniper and kermes oak. Also myrtle, thyme, gorse, rosemary, European fan palm .

The bird fauna is the most important fauna group in the Lagunas de la Mata y Torrevieja Natural Park with almost a hundred species recorded. Together with El Hondo and Santa Pola, the area constitutes an enclave of wetlands of crucial importance for the development of the biological cycles of numerous species that use it both in their migrations, nesting and wintering.

The flamingo (Phoenicopterus ruber) feeds and rests in La Mata with concentrations of up to 2,000 individuals. Around 3,000 black-necked grebes (Podiceps nigricollis) have also been recorded during migration.

The most characteristic invertebrate of the lagoons is the brine shrimp (Artemia salina). This small crustacean, which together with the larvae of the chironomid mosquitoes constitutes the fundamental diet of the numerous birds of these wetlands and thrives in waters with a high level of salinity.

There are a couple of easy walks that take you through the various habitas and also a cycling route. Apart from these the other important places to visit in the area (especially for birdwatching) are:

The Visitor Center is located in the old Forest House in the hamlet of La Mata (Torrevieja), located about 400 m from the N-332 Alicante – Cartagena, at km 64.5.

Here you will find plenty of information about the wildlife and walking/access routes in order to get the best out of a visit to the area.