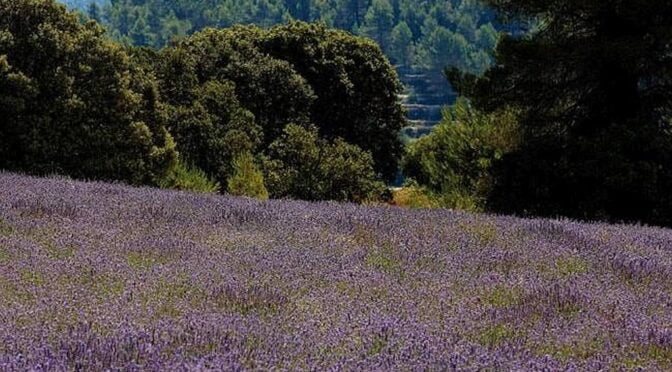 The scenic quality is captured in the “Barranc del Sinc” (a ravine which is approached from Alcoi). There are many natural springs in all areas of the mountains which provide moisture for the rich variety of fauna and flora. Snow which falls briefly during the winter months was once collected and placed in “Snow Caves” on the mountains, from where it could later be transported to the towns as ice blocks.

Many herbs grow wild on the mountainside and have been collected and used for perfumery, gastronomic and medicinal purposes over centuries. One of the traditional crafts kept alive is the distillation of these herbs to make alcoholic beverages. The “Herbero de la Sierra de Mariola” is one such drink flavoured with thyme, sage, fennel and lemon verbena amongst others. The “Cantueso Alicantino” is flavoured with an endemic species of long flowered thyme (Thymus longiflorus subsp. ciliatus). Seeds of Anise (Pimpinella anisum) are used to create “Anís Paloma de Alicante”.

The area has long been an important centre for textiles and dying. Of the 350 or so dye plants traditionally used in Valencia, only 50 are in cultivation today, with a plan to increase the variety of these useful plants.

The Sierra de Mariola Natural Park is a treasure for botanists and Aleppo pines (Pinus halepensis) are the dominant tree species along with shrubs of Rosemary (Rosmarinus officinalis), Gorse (Genista scorpius), Rockroses (Cistus sp) and Heather. Other tree types are Holm oak (Quercus ilex), Portuguese Oak (Q. faginea), Manna Ash (Fraxinus ornus), Maple (Acer opalus ssp granatense), Field Elm (Ulmus minor) and Laurustinus (Viburnum tinus) intermingled with Butcher’s broom (Ruscus aculeatus) and Honeysuckle. A wood of Yew trees (Taxus baccata) at “Teixera d’Agres” is protected as a micro reserve, no longer a common species for the area it is the most southern of its kind in Europe.

There are around 1200 species of plants that have been identified within the Sierra de Mariola Natural Park. Many of these are endemic to Valencia and some to this Sierra alone. One such endemic herb is the Mariola sage (Salvia blancoana subsp. mariolensis).

There are many species of raptors to look out for, the endangered Bonelli’s eagle, Golden, Booted and Short-toed eagles, Common buzzard, Peregrine falcon, Kestrel, Sparrowhawk and Goshawk. Nocturnal raptors include Eagle, Long-eared, Tawny, Scops, Barn and Little owls. Griffon vultures have been reintroduced to the area and are now breeding successfully. Common birds of the locality are Chaffinch, Serin, Robin, Great-tit, Red-legged partridge and Green woodpecker.

Mammals are less likely to be observed as they are generally nocturnal, never the less within the park are Wild boar, Wild cat, Badger and Fox, smaller ones include Stone marten, Weasel, Genet and Rabbit.

The Information Center and the management office of the Sierra de Mariola Natural Park are located in Mas d’Ull de Canals, located at kilometer 17.5 of the CV-795 road (Alcoi – Banyeres de Mariola). There is plenty of information for walking routes in the area and an exhibition showing the fauna, flora and customs of the area,

The official website for the Sierra de Mariola Natural Park is here: http://parquesnaturales.gva.es/es/web/pn-serra-de-mariola