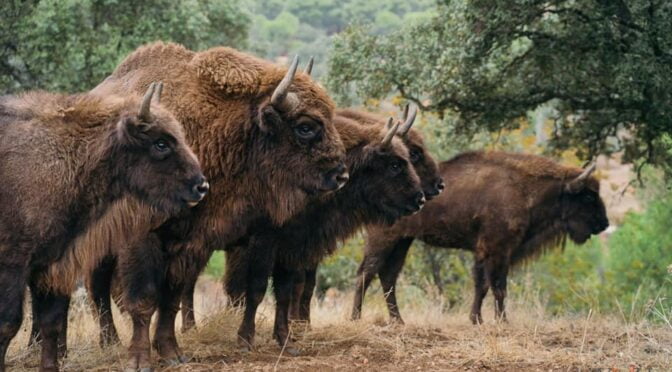 The European bison – Bison bonasus – Bisonte europeo is also known as the wisent is one of two extant species of bison, alongside the American bison. The European bison is the heaviest wild land animal in Europe and individuals in the past may have been even larger than modern animals.

Hunted to almost extinction across Europe in the early twentieth century with just a few remaining individuals in the Białowieża Forest (on the Belarus–Poland border), the European bison recovery is quite an incredible success story. By the end of the 20th century (In 1996), the International Union for Conservation of Nature re-classified the European bison as an endangered species, no longer extinct in the wild. Its status has improved even further since then, changing to vulnerable and later to near threatened.

Conservationists argue that mammals like European bison play a significant role in shaping ecosystems. Much as American bison have played a role in grassland management on Nature Conservancy preserves in North America, European bison are now shaping forests and open areas in Germany, France, Spain and other countries.

There is a fantastic article entitled “The Remarkable Story of How the Bison Returned to Europe” here: https://blog.nature.org/science/2017/08/22/remarkable-story-how-bison-returned-europe/

By the 20th century, against long odds, two populations still survived. One, in the remote Northern Caucasus Mountains of Russia, contained only a small number of individuals. A more viable population survived in Poland’s Białowieża Forest, a long-time protected reserve. In the mid-16th century, a Polish king instituted the death penalty for poaching a bison; restrictive laws remained in place with succeeding rulers.

In Spain they can be seen at the Valle del Bisonte (Bison Valley), Montaña de Riaño in the Picos de Europa.

By the beginning of the 20th century, the European bison was on the edge of extinction. All living European bison descend from 12 individuals, who were the only ones remaining in captivity. In Spain, the northern mountains ranges were bison habitat up to 12,000 years ago. The plight of the European bison is a signal to the impact that humankind is having on many thousands of other species across the planet. The project hopes that, by creating new herds, more genetic resiliency and diversity will develop over time.

After 15,000 years, European bison, wild pottoka horses and other megafauna return to long-lost habitat in the Cantabrian Mountains. Goal of the project is ecological restoration to promote climate change resilience, biodiversity conservation and sustainable management of the forest landscape under global change. The project develops job and income generation opportunities that support the rural economy – as drivers for sustainable development.

The reintroduced European bison are the main attraction in the area of the Picos de Europa along with other iconic species such as the indigenous wild Pottoka horses, Water buffalo, Cantabrian bear, Iberian wolf, and large herbivores.

European bison re introduction in Andalucia

Recently (2020) a new project to reintroduce the European bison to Andalucia was created located in the Sierra de Andujar natural park here is a video (in spanish) about it:

Join in with the conversation about the European bison over at the Iberia Nature forum: https://iberianatureforum.com/forums/topic/european-bison-reintroduction-in-andalucia/