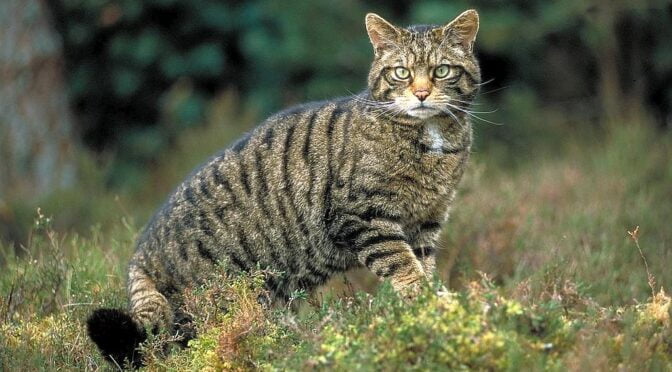 The Wild cat – Felis sylvestris sylvestris – Gato montes population in Spain is probably more abundant than we think but due to its elusive nature it is rarely seen and many people often confuse an average tabby cat for this wild cat if its seen up in the hills or away from human habitation. Especially, as its appearance is quite similar to that of a domestic cat but, remember, it has a much stronger build than most domesticated cat breeds. (Felis sylvestris catus).

The wildcat feeds on rabbits, rats, mice, lizards and insects such as grasshoppers, mantis and locust. From time to time, it also preys on small carnivores like martens, polecat, stoat and least weasel as well as very young fawns of red deer (Cervus elaphus), roe deer (Capreolus capreolus), and chamois (Rupicapra rupicapra).

If it looks like a tabby cat and you are up in the mountains away from towns and villages use the following to double check.

There are three types of wildcat in Spain

The most common throughout the European continent and in Spain it usually inhabits the Central, North and Northwest of the Iberian peninsular. Its coat is dark gray with brown tones and with a brindle appearance. Their weight ranges between 3 and 6 kg, with the male being 20% ​​larger than the female.

Prefers to live in warmer areas, especially in the southern part of the Peninsula, taking advantage of the wide expanses of Mediterranean forest. Its size is slightly larger than Felis silvestris silvestris and the coat has much darker tones.

Also known as the African wild cat or the desert cat, Felis lybica jordansi classified as a sub-species of felis silvestris silvestris and in Spain it is only present on the island of Mallorca and in some parts of the cities of Ceuta and Melilla in very small populations. It differs from the European wildcat by inconspicuous stripes on the nape and shoulders, a less sharply defined stripe across the spine and by the slender tail, which is cylindrical, less bushy and more tapering. Ears are normally tipped with a small tuft. Its fur is shorter than of the European wildcat, and it is considerably smaller

Images sourced from the nice article here in Spanish: https://muchamontana.com/donde-vive-gato-montes-espana/